이미지 확대
The South Korean government asked the United States to play an active role in improving the soured relations between Korea and Japan as the diplomatic tensions of the two neighboring countries are showing no sign of abating.

The Ministry of Foreign Affairs confirmed that deputy foreign minister Yoon Soon-gu met with David Stilwell, the U.S. assistant secretary of state for East Asia and Pacific Affairs, on the sidelines of the East Asia Summit on Saturday to discuss the current issues surrounding the U.S.-Korea alliance and trilateral relations of the U.S., Korea and Japan.

At the meeting, Yoon explained his counterpart Stilwell the Korean government’s efforts to seek solutions to mend its relations with Japan through dialogue and formally asked the U.S. to play a role in mediating the dispute between the two neighboring countries, according to the foreign ministry. 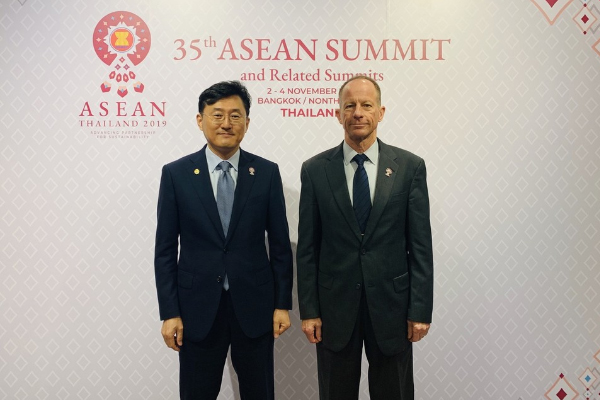 Deputy Foreign Minister Yoon Soon-gu (left) and David Stilwell, the U.S. assistant secretary of state for East Asian and Pacific affairs, posing for photos at East Asia Summit in Bangkok on Nov. 2, 2019. [Photo provided by the Ministry of Foreign Affairs]

Amid escalating tit-for-tat move, the two countries removed each other from their own list of trusted allies enjoying fast-track shipment procedures. In August, Seoul also announced it would end the General Security of Military Information Agreement (GSOMIA), a military intelligence-sharing pact with Tokyo, unless Japan drops its trade controls. The agreement, first signed in 2016 and renewed annually unless one side informs the other 90 days in advance of plans to end the deal, is set to expire on Nov. 23.

Meanwhile, South Korean President Moon Jae-in held a brief 11-minute tete-a-tete with Japanese Prime Minister Shinzo Abe in the sidelines of ASEAN-related summit meeting in Bangkok. Moon did not get a private moment with Abe during G20 Summit held in Osaka in June amid standoff over the wartime labor issue.

By Kim Sung-hoon and Choi Mira