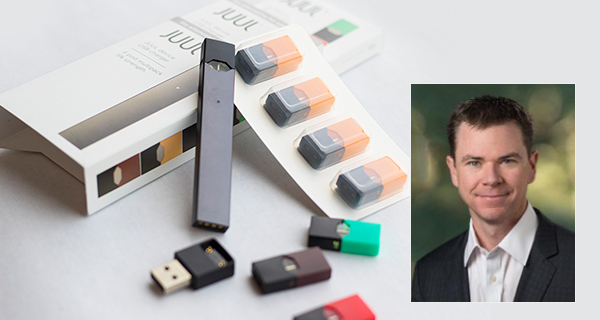 According to industry sources on Sunday, the chief executive of Juul Labs arrives Monday evening for a two-day visit to Korea. He will drop by Juul Labs Korea to discuss ways to address the ongoing challenges associated with the e-cigarette business in Korea, but it is not clear whether he would meet with Korean government officials or retailers.

A Juul Labs Korea official confirmed his visit, saying it is “a typical visit to one of its Asian subsidiaries for business monitoring as new CEO.”

The visit comes just a month after Crosthwaite’s tenure began. The longtime executive of U.S. tobacco giant Altria succeeded former Juul CEO Kevin Burns, who stepped down in late September under the multiple whammies of health issues and an enormous spike in teen vaping, sparking a public backlash with stricter state restrictions in the U.S.

Altria, the Marlboro maker, is the largest stakeholder of Juul Labs, who invested $12.8 billion in December last year.

Since the new CEO took office, Juul has announced to slash about 500 jobs, or about 10 to 15 percent of its total head count, by the end of the year, with plans to suspend all types of product advertising in the U.S. and slash the marketing budget.

Juul is embroiled in multiple suits and is under scrutiny over a potential link between its favored e-liquid vaping and a spike in lung disease and recent deaths from severe lung disease. In Korea, all major convenience store operators have decided to halt the sale of liquid-type flavored e-cigarettes after the Korean government’s strong recommendation against such products due to a possible link to severe lung disease. Of the four types of e-liquid whose sale has been suspended, three are Juul’s products – tropical, delight, and crisp flavors.