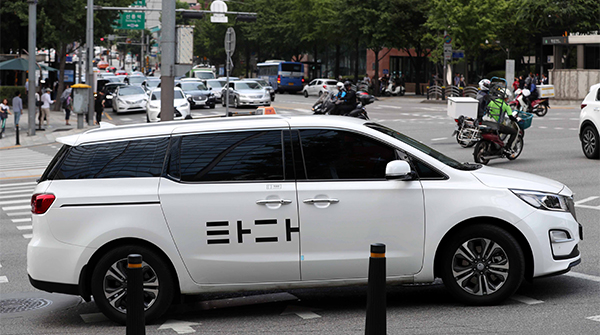 Senior government officials belatedly expressed regret over state inaction in refereeing between new and traditional mobility services after executives of the ride-hailing business Tada were indicted for their “illegal” operation.

“Tada clearly has a positive impact on the market in terms of creating competition with new and innovative services,” Joh Sung-wook, chair of the Fair Trade Commission (FTC), said in an interview Friday. “The FTC should have made this clear when Tada first came out but we missed the timing,” she added.

Joh took office in September, replacing Kim Sang-jo, who currently serves as the chief presidential secretary for policy. Not a single comment on Tada had been issued from Kim during his tenure.

Joh`s support for Tada came about a week after the country’s prosecutors indicted Tada’s managing chiefs on charges of breaching local transportation law, a surprise blow to the platform operator that has been in operation for more than a year.

Tada was launched in October 2018 and surged in popularity by offering a new type of ride-hailing service in 11-seat vans. While Uber-like services are currently banned in Korea, rental vans with 11 to 15 seats can be legally leased with a driver. Tada is now the country’s top ride-offering service, securing 1.3 million subscribers and 9,000 registered drivers in just a year of its launch. 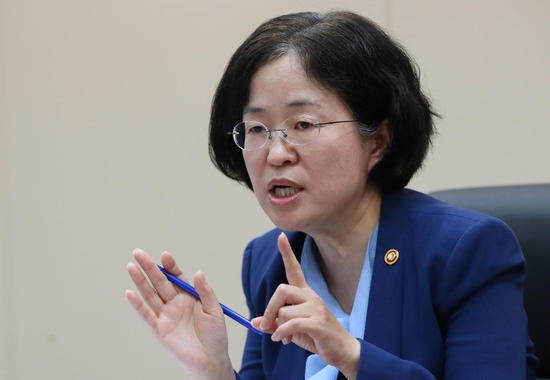 Joh Sung-wook, the chair of the Fair Trade Commission. [Photo by Yonhap]

The ride-sharing industry has failed to take off in Korea due to stiff regulations and vehement opposition from die-hard taxi drivers. Earlier this year, Kakao Mobility had to delay the launch of its new carpool app and was only able to release it under significantly curtailed conditions after three taxi drivers died by self-immolation in protest.

“Introducing new mobility services like Tada to the market is a positive change,” Joh said. She noted that when Tada’s launch had first sparked a debate of whether the service was illegal or not, the FTC should have made its position clear by stressing Tada’s market-friendly aspects and leaving it to other government bodies to discuss its negative impacts.

The antitrust watchdog is authorized to determine whether a proposed legal act or business ensures fair competition. The new head’s remarks suggest that the current controversy around Tada could have been averted had the agency exercised its authority in a timely manner.

“The information communications technology sector is extremely complicated, making it difficult to be handled by just one department,” Joh said.

She vowed to install a 15-strong task force devoted to ICT, to be run under three subunits of online platform, mobile and intellectual properties. The team would work closely with the FTC’s economic analysis and international cooperation departments and seek advisory support from outside experts, Joh said.

Other cabinet ministers all came forward in support of the ride-hailing platform only after the administration’s inaction set off a legal battle.

Hong Nam-ki, deputy prime minister and finance minister, wrote in his Facebook page that it was “a shame” for prosecution to take the case to court before working out a social compromise

“There is no reason why a business that is playing out in more than 65 countries cannot take place in Korea, a dynamic country with advanced ICT capabilities,” Hong said. “But new businesses like this inevitably lead to conflict with existing stakeholders so that we need to find a way to coexist,” he added.

Kim Hyun-mi, minister of land, infrastructure and transport, described the indictment as “regrettable.” The transport ministry has been in talks with Tada to bridge the differences between ride-hailing operators and the taxi industry.

Park Young-sun, minister of SMEs and startups, also expressed her disappointment with the decision, and criticized the prosecution of being “mired in the traditional mindset.”