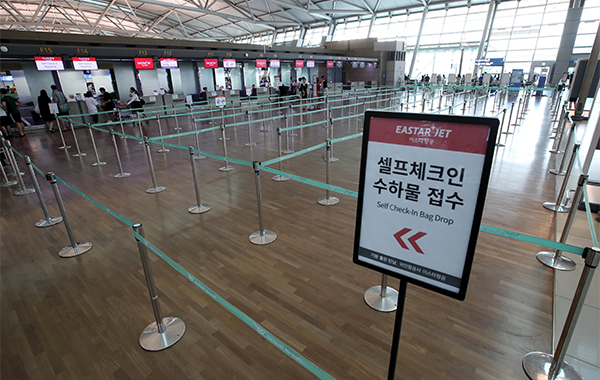 A total of 31.23 million passengers, including 22.91 million on international routes, traveled during the three months that ended on Sept. 30, the Ministry of Land, Infrastructure and Transport said.

The number of passengers on international routes gained 4.8 percent in the quarter from a year ago, and the corresponding figure on domestic routes added 3.2 percent, driven by recovering travel demand from China and increased flights by low-cost carriers, the ministry said.

The number of passengers on routes to Japan fell 14.6 percent in the third quarter from a year earlier due to a consumer boycott of Japanese products amid a row between Korea and Japan over wartime labor issues and export controls.

For the fifth week of September, the number of South Korean air passengers to Japan came to 225,646 people, down 36.3 percent from 354,411 people a year ago, with the flight occupancy rate reduced to 67.8 percent from 77.1 percent.

The number of passengers on routes to China grew 12.2 percent on year to 4.96 million people, and the figure on routes to other Asian destinations showed a significant increase: Vietnam (22.5 percent), the Philippines (35.6 percent) and Taiwan (20.0 percent) as they posed as alternatives to Japanese locations.

Air cargo deliveries fell 5.1 percent on year to 1.06 million tons in the third quarter in line with the slump in global demand for IT components that must be delivered by air.