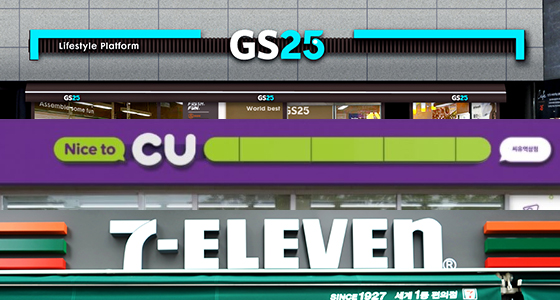 이미지 확대
Fierce competition on top of unfair franchise practices has led one out of every five major convenience stores in South Korea to suffer from losses.

According to Representative Woo Won-shik of the Democratic Party on Tuesday, 10,500 out of 33,000 convenience stores managed by the country’s three major franchise operators CU, GS25, and 7-Eleven are on the verge of falling into the low-sale segment that earn 1.5 million won ($1,256) or less a day, and one in five stores 1.1 million won or less.

His remarks were made during a parliamentary hearing on the Ministry of SMEs and Startups on Tuesday at the National Assembly in Yeouido, Seoul.

Woo noted that 6.7 percent of the convenience stores also earn only a mere 800,000 won or less a day, calling for the need for prompt actions.

Woo highlighted that convenience stores that make 1.1 million won or less in sales a day account for 20 percent of all convenience stores and that they are suffering from losses after paying franchise commission, rent, and workers.

Data showed that sales of convenience store headquarters rather tripled in 2018 from 4.8 trillion won in 2007 while average profit of franchise stores dropped from 503 million won to 470 million won during the same period.

Unfair franchise terms between a franchise outlet and the headquarters also weigh on individual store owners.

“There are issues related to high franchise commissions as compared to margin, and also, unfair practices such as the franchise owner paying for all store maintenance fees and disposed product fees,” Woo said. “Such unfair practices should be wiped out.”

Park Young-sun, minister of SMEs and Startups, said that the ministry will come up with comprehensive measures as competition heats up amid growing number of convenience stores.