이미지 확대
“No Japan” movement remains strong as it nears 100th day since South Koreans launched voluntary boycott on anything from Japan from beers to air tickets to the neighboring country after Tokyo imposed curbs on high-tech material exports to Korea.

According to preliminary data from Korea Customs Service on Tuesday, Korean imports of Japanese beer stopped at a mere $6,000 last month, plunging 99.9 percent from the same month last year to suggest virtually zero increase. Japanese brands that had maintained its top position in the nation’s imported beer market for nearly a decade have been pushed down to 28th, even falling behind Russian and Turkish products.

The ranking of Japanese beer slipped to third right after Tokyo slapped export curbs in July and further to 13th in August with more consumers taking part in the boycott against Japanese products. Entire beer imports also dropped 8 percent in September from a year ago, and local brands are benefiting from the elimination of Japanese competition.

이미지 확대
Although Korean airlines significantly cut their flight services to Japan, the number of passengers flying to the country tumbled 30 percent from the previous year in September, a month with the four-day-long Chuseok holiday. Flight reservation rate for Japan-bound trips reached just 60 percent for October.

The Korea Economic Research Institute (KERI) found that the 27.6 percent drop in the number of Korean visitors to Japan in July and August resulted in 350 billion won ($293 million) in loss of production inducement for Japan, almost nine times higher than that for Korea with 39.9 billion won. 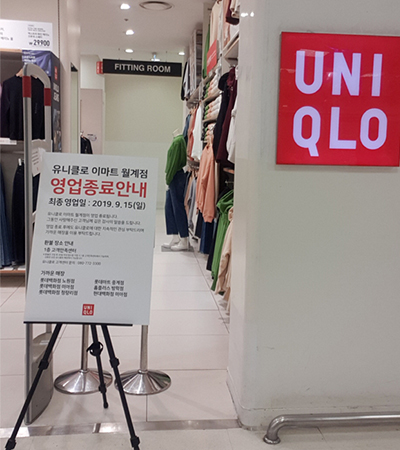 이미지 확대
Japanese fashion retailer Uniqlo, which was once the leading fast-fashion brand in Korea, has also been hit hard by the boycott campaign. The credit card transaction volume for the company plunged 70.1 percent from 5.94 billion won in the fourth week in June to 1.77 billion won in the same week in July, and it has also closed down four outlets in Seoul since July.

The apparel company, however, has stepped up its marketing efforts on expectations of recovery in sales during the winter season. Sales have been rebounding at its online store, with its most popular item Heattech, a heat insulation innerwear, and light padded jackets sold out online, according to sources.

By Kang In-seon and Choi Mira