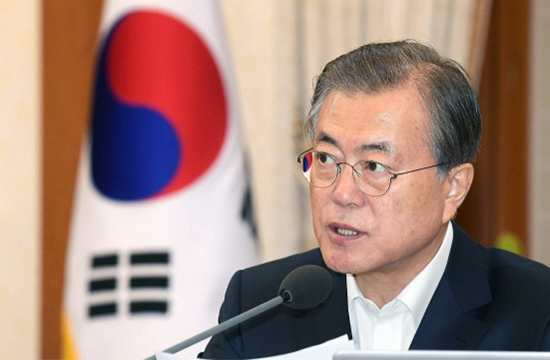 South Korean President Moon Jae-in on Tuesday pressed the government to do more to legislate bills to promote materials, parts, and equipment and new innovation sectors to aid the economy in the face of multiple trade challenges.

“The government should enhance its communication with the National Assembly so that a special bill on materials, parts, and equipment is passed quickly,” Moon said, during a weekly Cabinet meeting at the Blue House on Tuesday.

He also ordered additional fiscal, tax, and financial incentives for companies as they struggle against Japanese export curbs on high-tech materials essential for the production of chips and displays since July.

Little has improved on relationship with Japan at the worst since the two nations normalized diplomatic ties after Japan slammed export restrictions on Korea from July 4, but the country has coped with the challenges well so far, he noted.

Efforts have also been made to wean off reliance on Japanese supplies and develop indigenous technologies through closer partnership between large and small- and mid-size companies.

Despite Seoul’s call for diplomatic dialogue to resolve issues, Tokyo has remained mum.

Japan’s Emperor Naruhito’s enthronement ceremony on October 22 could become a turning point as Prime Minister Lee Nak-yon is mulling to may attend the ceremony on behalf of President Moon.

“The competitive council on materials, components, and equipment headed by deputy prime minister will be launched after three days,” Moon said. He called for the council to do its best to significantly up competitiveness of key industries as a control tower linking government policies and industry sector.

Moon noted that escalating global trade tension and slowing economy is continuing to drag on the local economy. He said the government has been particularly focused on revitalizing the economy and creating new growth engines.

He also touched upon the government’s policy on shorter working hours.

He asked the government to study what it can do to help companies as flextime review and deregulation bills are being stalled due to legislative stalemate.