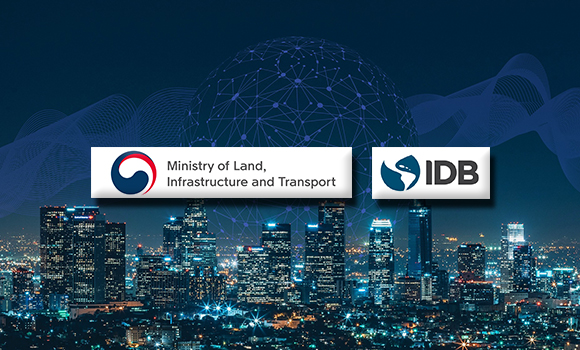 이미지 확대
South Korea will back the Inter-American Development Bank (IDB) in the project for urban modernization and smart city proliferation across South and Central America.

Korea’s Ministry of Land, Infrastructure and Transport said Monday it signed a memorandum of understanding with the international lender to finance the development of smart cities and infrastructure in Latin America and share information, technology and personnel related to the projects.

Under the agreement, Korea would select one or two major cities in the region for smart city planning and have Korean experts lead the design.

The region requires infrastructure development of about $150 billion every year over the next 30 years. Private-public partnerships in the region are expected to reach $1 trillion over the next decade. Demand for smart city planning in transportation, security, disaster prevention, water resources and medical care is also rising, offering big opportunities for Korean builders and smart city related firms.

Korea will work alongside the IDB to ease the housing problem in Colombia and other countries as part of the bank’s $1 billion initiative announced in May to address the sudden and unprecedented Venezuelan migrant flows to neighboring countries.

The IDB was founded in 1959 to support economic and social development of Latin American countries. The bank consists of 48 member countries and a staff of 2,000, and is the largest source of development financing for the region with a capital base of $176.8 billion. Every year, it offers cheap loans of around $10 billion to $13 billion to the governments of its borrowing member countries.

Korea’s transport ministry said it plans to tap its 1.5 trillion won ($1.25 billion) global plant, infrastructure and smart city fund raised in the first half of this year to finance development projects in Latin America.

By Sohn Dong-woo and Kim Hyo-jin