이미지 확대
Sales of Japanese cars in Korea extended losses last month, dipping nearly 60 percent on year, amid broadening anti-Japan sentiment with little sign of easing in the tensions between the two neighboring countries at odds over past and trade issues.

The number of newly registered Toyota, Honda and Nissan vehicles imported from Japan stood at 1,103 in September, down 59.8 percent from 2,744 a year ago, according to the data from the Korea Automobile Importers & Distributors Association (KAIDA).

Last month losses widened from a 56.9 percent dip in August and a 17.2 percent fall in July, when Japan began to tighten export regulations against Korea. In August, Japan officially removed the neighboring country from its list of countries for preferential treatment in trade procedures. 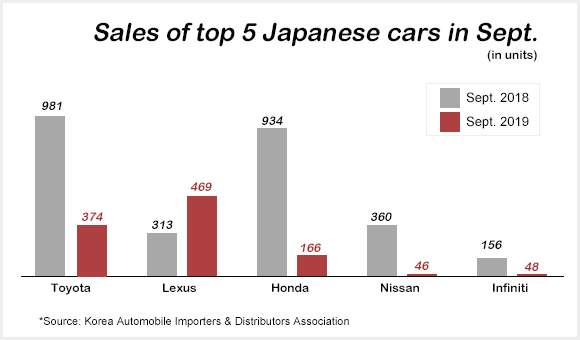 이미지 확대
Japanese car sales for the first nine months stood at 28,657, down 6.1 percent from the same period a year earlier, bucking a growth trend of the past four years. Their market share fell to 5.5 percent in September, only one third the level of the previous year.

The cumulative Japanese share in the import market for the first nine months of this year was 17.2 percent, still higher than 15.5 percent a year ago as Lexus sales jumped by 49.8 percent whereas German carmakers were relatively in a slump in the first half.

But Lexus sales in September contracted by 22.2 percent from 603 in August. The Lexus ES300h, once a popular model, saw its sales ranking drop from 3rd place in July to 10th in August and out of the list in September. 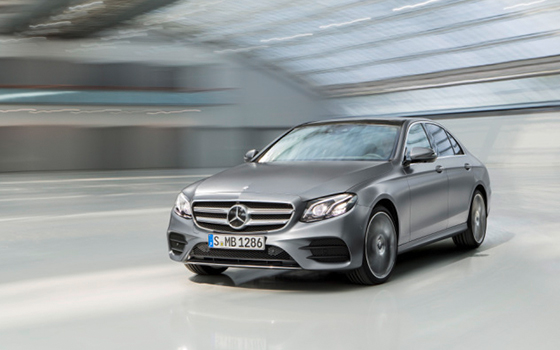 Germany’s Mercedes-Benz posted a big jump in September with 7,707 units, up a whopping 296.7 percent from a year ago. Its market share came to 38.2 percent among imported car brands. The brand’s September sales hit the highest level since March last year.