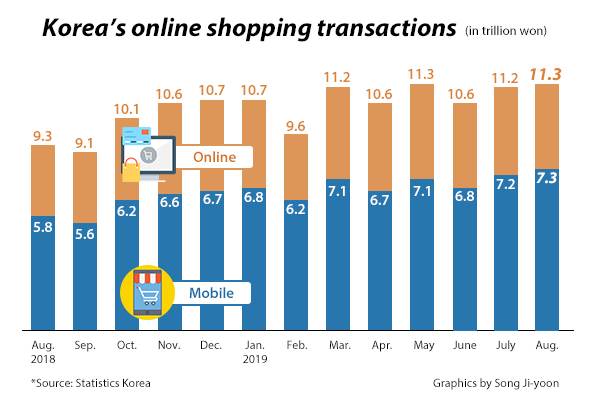 이미지 확대
Online shopping transaction hit a record high in August in Korea to reflect the changes in the lifestyle amid surge in single-person households preferring to stay in and have groceries and meals delivered, data showed Wednesday.

According to monthly data from Statistics Korea, the total value of online transactions came to 11.25 trillion won ($9.3 billion) in August, up 21.4 percent from the same period a year ago. It is the highest monthly figure since the agency began compiling related data in 2001. The previous highest was in May, when the value reached 11.23 trillion won.

The on-year growth in the total value of online transactions, which combines those via personal computers and mobile devices, also recovered the 20 percent level for the first time after 20.3 percent increase in December, last year, data showed.

By product category, the value of transactions in food services jumped by the largest 83.9 percent in August from a year ago while that in food and beverages 33.1 percent. Online transactions of home appliances, electronics, and communication devices also increased 30.1 percent during the same period, mainly driven by surging demand for cooling-type electronics such as air conditioners, fans and refrigerators.

Statistics Korea attributed the surge in the value of online transactions in August to a rise in demand for food-related products and services amid changing consumer patterns.

Yang Dong-hee, director of service industry trend at Statistics Korea, said that changes in consumer trends amid diversification in food services and growing popularity of simple home-meal kits have led to an explosive surge in the value of food-related transactions. Demand for home appliance products was also high in August due to seasonal factors. The all-time high figure is also attributed to increased purchases ahead of Chuseok, Korea’s Thanksgiving holiday that fell earlier than previous years, Yang said.

The value of transactions via mobile devices hit a fresh high in August, increasing 27.2 percent on year to 7.3 trillion won. It is the highest amount since the agency began compiling related data in 2013. The previous highest was 7.2 trillion won in July.

By product category, a surge in the value of mobile shopping transactions was led by growing demand for food services as well as for food and beverage products as more consumers ordered food via mobile apps.