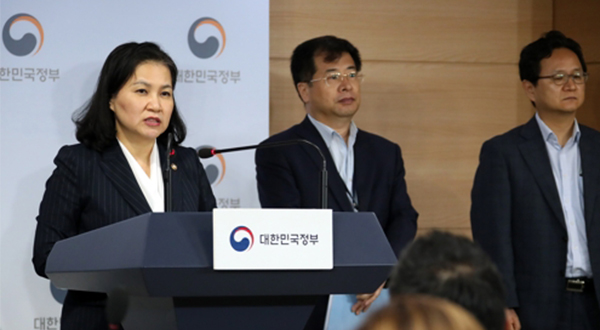 Seoul made it official Wednesday that it is suing Tokyo at the World Trade Organization (WTO) for its “politically motivated” curbs on exports bound for Korea.

Trade Minister Yoo Myung-hee, in a press briefing Wednesday, called Japan’s export curbs “politically motivated” and a “discriminatory” measure taking direct aim at South Korea. A WTO dispute settlement process would immediately kick off once the Korean government delivers a complaint to Japan and the WTO.

Japan’s latest actions to tighten export controls are widely viewed as retaliation against Korean court rulings that ordered Japanese companies to compensate Korean victims of forced labor during Japan’s occupation of Korea from 1910 to 1945. Japan claims that all claims were settled in a 1965 deal that normalized bilateral relations.

Under the WTO dispute settlement process, Korea would first try to resolve the issue through bilateral negotiation with Japan. If the two sides fail to reach a compromise over two months since filing, a WTO panel will intervene. The arbitration process usually takes more than two years to reach a ruling.

Subjecting Korea to a case-by-case export clearance for the three chemicals discriminates Korea against other WTO member countries and violates the WTO’s most-favored-nation principle.

The actions are also in breach of WTO rules that prohibit countries from imposing restrictions on exports or imports apart from duties, taxes or similar charges. Under Japan’s tightened export controls, Japanese exporters now have to seek a government license each time they want to ship the three items to Korea and are blocked access to all forms of comprehensive approval.

The export restrictions have become a huge burden for Korean companies. Shipments that once took one to two weeks to arrive upon order now may take up to 90 days, with the added uncertainty of a possible rejection from Japanese authorities.

Korea also argues that Japan’s politically-motivated measures arbitrarily impede trade and are inconsistent with WTO principles that member countries should run fair and consistent trade policies. Tokyo’s actions are posing a threat to the global supply chain, the government added, given Korea’s dominance in the world production of chips and displays.​