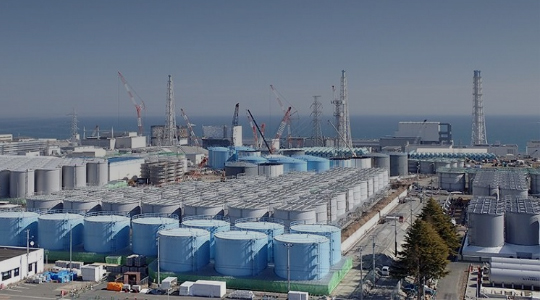 The South Korean government on Thursday called on the International Atomic Energy Agency (IAEA) to lead a concerted international effort to block Japan from dumping deadly nuclear water waste from the 2011 Fukushima power plant meltdown into the Pacific Ocean, which is one of a few treatment options considered by Tokyo.

In a joint press conference on Thursday, the Ministry of Science and ICT and Nuclear Safety and Security Commission called for immediate international coordination to deal with the issue of the Fukushima nuclear waste treatment that can affect the global ecosystem. As part of efforts to call more international attention to the issue, the ministry has sent a letter to the IAEA asking for its more active role in solving the Fukushima nuclear waste treatment issue that poses a serious threat to not only neighboring countries but also the overall international community.

In the letter, the Korean government delivered “serious concerns” about the potential hazardous environmental impact of dumping the contaminated waste into the ocean, which is one of a few treatment options Tokyo is reviewing. It also requested that IAEA work with fellow organizations as well as interested parties such as China, Taiwan, Russia, the United States, and Canada to play a more active role in dealing with Japan’s radioactive water waste treatment.

In a separate plan, Mun Mi-ock, first vice minister of science and ICT, and Uhm Jae-sik, chairman of Nuclear Safety and Security Commission, will raise the related issue and inform IAEA members of Japan’s Fukushima nuclear waste treatment options at IAEA General Conference that will be held for five days from Sept. 16 in Vienna, Austria.

Representatives from Korea – from the science and ICT ministry, Nuclear Safety and Security Commission, and foreign ministry, will ask the IAEA to lead an international coordination effort to tackle the issue.

Industry insiders, however, noted that the latest call for more concerted international effort in dealing the nuclear safety issue would end up in simple discussions during the conference without any practical actions or restrictions that could be imposed on Japan because the international organization has no authority to regulate Japan.

The Japanese government, meanwhile, invited foreign diplomats in Tokyo from 22 countries including Korea on Wednesday and shared information on the government’s plans to treat radioactive wastewater from its No.1 Fukushima unit. It said that it “has not yet made a final decision” on ways to handle the contaminated water.

Concerns are growing that Japan may dump the tainted water into the ocean as Tokyo Electric is running out of tank space at the Fukushima nuclear plant used to store the radioactive water waste since the 2011 Fukushima meltdown. As the energy company expects the storage space would run out by mid-2022, the Japanese government is actively seeking alternative options to treat the contaminated water.

By Song Kyung-eun and Lee Eun-joo