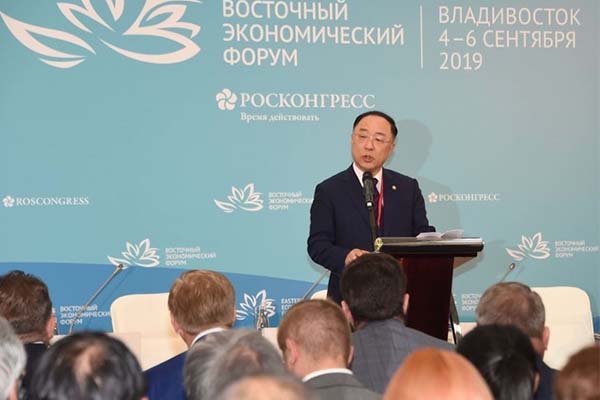 [Provided by Ministry of Economy and Finance]

Hong Nam-ki, South Korea’s deputy prime minister and finance minister, proposed creating a joint investment fund with Russia to foster the growth of component, material and equipment sectors in both countries, as the government goes all out to diversify the supply chain for Korean manufacturers in the face of Japan’s trade restrictions.

“With the fund, Russia can secure overseas markets by commercializing its core technologies while Korea can diversify its sources of materials, parts and equipment,” Hong said at a session with economic and business leaders at the 5th Eastern Economic Forum held in Vladivostok, Russia on Thursday (local time).

“We know that even the strongest economy cannot avoid a downfall if it cuts ties with neighboring countries and isolates itself from the global supply chain,” he added, taking a slight jab at Japan. 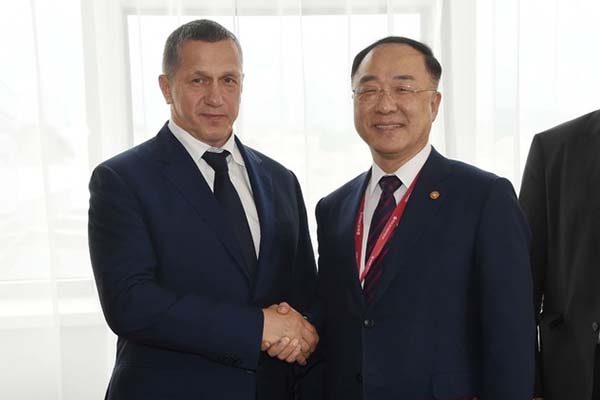 [Provided by Ministry of Economy and Finance]

Seoul recently announced plans to ramp up investment in more than 100 items designated as core sectors. Starting with 1 trillion won ($834 million) this year, it intends to pour in more than 5 trillion won from 2020 to 2022 to build up capabilities in critical tech components, materials and equipment.

Hong called for stronger economic partnership between the two Koreas as well as with Russia and China to reinforce the weakened Eurasia supply chain and bring renewed growth to the region.

He also pushed for a swift trade deal in services and investment between Korea and Russia and the launch of a broad Eurasian Economic Union.