이미지 확대
Sales of Japanese cars in Korea plunged nearly 60 percent in August against a year ago amid worsening Korean sentiment towards the neighbor country as the diplomatic row spread to trade and security fronts.

Newly registered Japanese cars in Korea totaled 1,398 in August, down 56.9 percent from the same month a year earlier, according to Korea Automobile Importers & Distributors Association on Wednesday. Sales declined at a faster pace than the 17.2-percent drop in July, when the consumer boycott began to take effect.

Cumulative sales from January to August slipped 0.7 percent to 27,554 units from the year-ago period. Japanese car sales have not fallen since 2014.

Japan’s share in Korea’s foreign auto market more than halved to 7.7 percent in August from 16.9 percent a year earlier. But its year-to-date share still remained at 18.8 percent, above last year’s 15.4 percent, as Japanese brands had gained significant ground versus their German rivals prior to the boycott.

Luxury model Lexus sales in August stood at 603 units, up 7.7 percent on year but plummeting 38.6 percent from the previous month. Lexus ES300h, which had been the third best-selling foreign model in Korea, fell sharply to 10th. 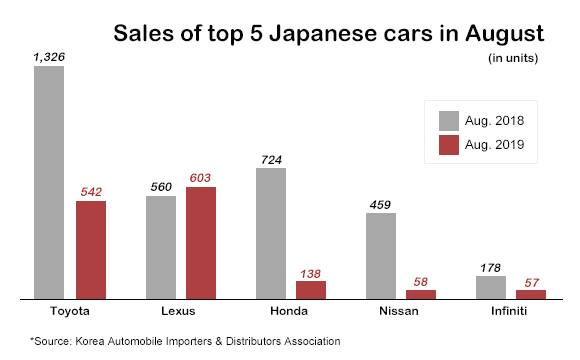 이미지 확대
The boycott has spilled over to the used car market as well. According to local used market dealers, auctions of Japanese cars have nearly halved compared to the pre-boycott period, with prices down by millions of won.

Koreans started boycott campaigns of all things Japanese from early July after Tokyo curbed exports of key materials needed to power Korea’s core manufacturing sectors. The dispute stemmed from Korean court rulings on wartime reparation claims during Japan’s occupation of Korea from 1910 to 1945, a source of bitter resentment for many Koreans to this day.

Japan’s trade restrictions, which Korean officials slammed as retaliation for the court rulings, worked up a wave of nationalistic fervor among many Koreans and triggered a boycott of all Japanese brands, from clothes to beer to cosmetics, and even travel to the country. Sentiment worsened after Japan removed Korea officially from its white country list for trusted traded partners in August. Korea took a tit-for-tat action and walked out of a mutual military intelligence sharing pact.

Uniqlo, a popular Japanese apparel retailer in Korea, saw its sales plunge nearly 70 percent in July as a result of the boycott. Korean airlines were also forced to suspend or reduce their flights to Japan.