Seoul hints of walking away from military information deal with Tokyo 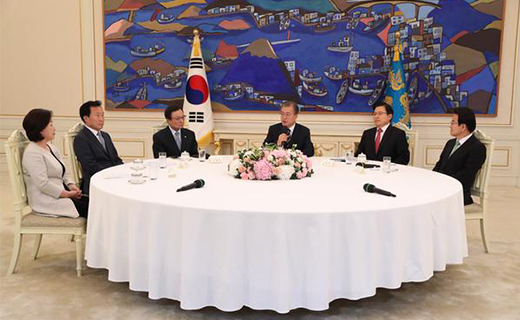 South Korea could walk away from the military intelligence sharing agreement with Japan if the neighboring country pushes on with its trade protectionism against Korea, a senior security adviser suggested.

“The government’s stance for now is to maintain the agreement but it could be reconsidered depending on the situation,” Chung Eui-yong, director of the National Security Office, told Sim Sang-jung, head of the minor opposition Justice Party, when she floated the idea at the Blue House on Thursday during emergency talks with the president and political party leaders.

Tokyo earlier this month tightened exports of three materials that are vital to Korea’s core industries on national security grounds. It also threatened to remove Korea from its white list of countries that enjoy preferential treatment in exports of dual-purpose items and technologies. The change of status would mean as many as 1,100 items would require individual permit from Japanese authorities before heading to Korea.

Ko Min-jung, the presidential spokesperson, later reaffirmed that the government`s current position is to keep the military agreement, saying Chung’s comments were meant as Seoul reviewing all possible options if the situation deteriorates. Washington has repeatedly warned against the trade row between its two most important Asian allies spilling over to the security front. 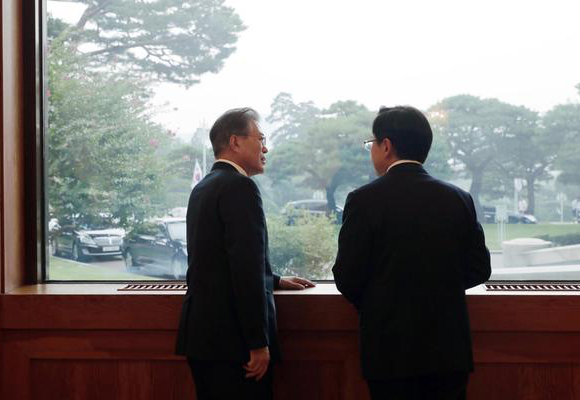 South Korea signed a General Security of Military Information Agreement (GSOMIA) with Japan in November 2016 to counter the nuclear and missile threat from North Korea. The deal is automatically renewed every year unless either party gives a 90 days’ notice to terminate it. The agreement is set for renewal on August 24.

President Moon Jae-in also reportedly said in the Thursday meeting that he is “open to sending envoys or holding high-level talks if necessary” but that “they may not be the total solution” to resolving the issue. His remarks implied he has little intention to have a sit-down with Japanese Prime Minister Shinzo Abe for now, casting doubts of a resolution being reached any time soon.

Moon shot down arguments that the government was playing the nationalism card by fanning Koreans’ longstanding resentment over Japan’s 1910-1945 colonial rule. “I do not have negative sentiment towards Japan,” he said, adding that he had even proposed engaging in shuttle diplomacy with Japan to improve bilateral relations.