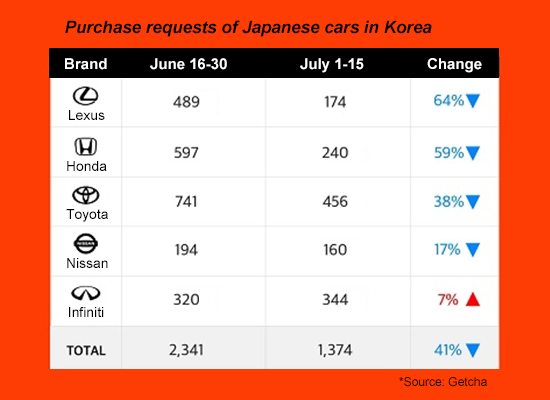 이미지 확대
The consumer boycott building up in South Korea against Japanese brands after Tokyo began restricting exports to Korea due to a row over wartime issues has begun to affect the most popular product from the neighboring country – cars.

Korea saw the number of purchase inquiries for the five major Japanese auto brands - Toyota, Lexus, Nissan, Infiniti and Honda - fall to 1,374 in the first 15 days of this month, according to Getcha, a local data provider of new car releases. This was 41 percent lower compared with the latter half of June, before Japan on July 1 announced export curbs on Korea.

From July 4, Japan restricted exports to Korea of three key materials used to make semiconductors and displays, taking aim at products that are central to Korea’s export-reliant economy. While Tokyo cited security reasons, the curbs were widely regarded as retaliation for Korean court rulings that ordered Japanese companies to compensate Koreans forced to work during World War II.

The move revived Korea’s deep-rooted bitterness towards Japan after its forced colonization from 1910 to 1945. The recent voluntary boycott movement has quickly spread to all things Japanese from beers to cars. 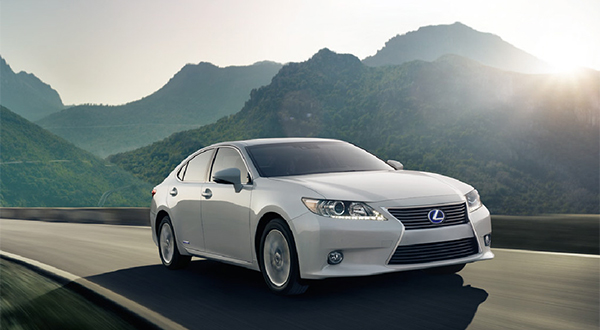 이미지 확대
Luxury name Lexus took the biggest hit, with the number of quote requests plummeting 64 percent over the cited period. Honda tumbled 59 percent, Toyota 38 percent and Nissan 17 percent. Infiniti was the lone winner, seeing a 7-percent uptick in price quotes largely due to its heavy promotion, according to Getcha.

“We would need a more in-depth analysis but demand for Japanese cars has definitely weakened,” said a Getcha official. “Seeing how Japanese brands were specifically targeted, it seems reasonable to assume the recent boycott is behind this.”

Meanwhile Japanese fashion giant Uniqlo issued a formal apology Wednesday as its sales in Korea took a sharp fall after a senior executive’s comment that “the boycott would not last long” made headlines in Korean media last week. Uniqlo raked in sales of 1.37 trillion won ($1.16 billion) in Korea last year.

By Kim Ha-kyung and Kim Hyo-jin