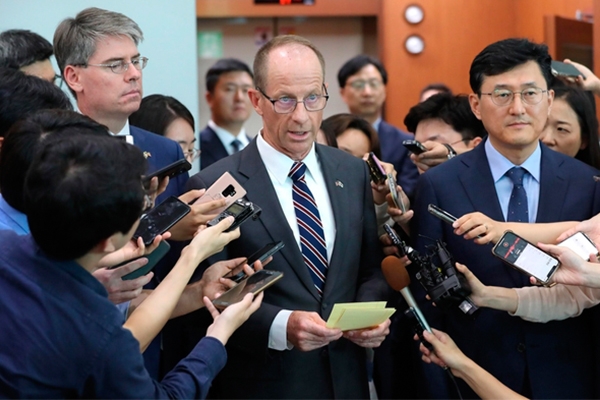 David Stilwell, the U.S. assistant secretary of state for East Asian and Pacific affairs, speaks to reporters at the Foreign Ministry in Seoul on July 17, 2019. [Photo by Yonhap News]

A senior U.S. diplomat told South Korea and Japan that the United States would “do what it can” to help resolve the heightening diplomatic and economic dispute between its two biggest Asian allies.

David Stilwell, the new U.S. assistant secretary of state for East Asian and Pacific affairs, met with top Korean officials Wednesday after visiting Japan earlier this week in hopes of defusing an escalating trade row that could potentially disrupt the global supply chain of memory chips and smartphones.

“The U.S., as a close friend and ally to both, will do what it can to support their efforts to resolve it,” Stillwell said.

But in keeping with the U.S. policy of non-intervention, the top U.S. diplomat for East Asia was reluctant to become too involved, saying it was fundamentally up to Korea and Japan to settle the dispute.

Adding to the tensions, Japan has threatened to remove Korea from its white list of countries that enjoy fast-track preferential status as soon as next month, a move that could potentially delay shipment of more than 1,000 items to Korea.

A full-out trade war between the two manufacturing powerhouses could have wide-ranging ramifications. South Korea is responsible for 70 percent of the world’s memory chips, which are used to power data centers, mobile phones and other electronic devices.

Stilwell, in his meetings with Seoul officials, also reportedly asked Korea to join the U.S.-led international military coalition to safeguard the strategic waters in the Strait of Hormuz. Washington has been trying to put together a coalition of allies to patrol the waters off Iran and Yemen after a series of attacks against oil tankers there in May and June, which the U.S. blames on Iran. Observers say the U.S. may have tried to first enlist its key allies Japan and Korea during Stilwell’s visit to the two countries.

Kim Hyun-chong, deputy director of the presidential National Security Office, who met with Stilwell earlier on Wednesday, denied the claims. But according to several senior government officials, Korea is reviewing various options to aid the U.S. effort. Instead of mobilizing new troops, it is considering redirecting some of the naval forces in the nearby area, most likely the Cheonghae navy unit that has been dispatched near the coast of Somalia to protect Korean ships, the sources said.

By Ahn Jeong-hoon and Kim Hyo-jin