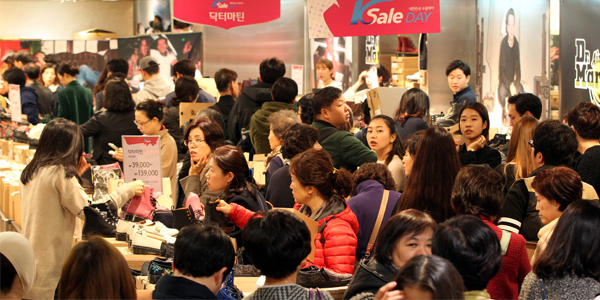 이미지 확대
Korea Sale Festa (KSF), South Korea’s equivalent of Black Friday, will take place in November this year, falling in the same calendar of major year-end discount extravaganzas in other countries like Black Friday in America and Singles’ Day in China.

KSF now in its fourth year is a week-long shopping bonanza launched by the government to draw locals and tourists through deep discounts in various retailers including department stores, hypermarkets, online stores and traditional markets. But from this year local retailers in the private sector will lead the program and build an overall plan, the government said during a Wednesday meeting presided over by Deputy Prime Minister and Minister of Economy and Finance Hong Nam-ki.

이미지 확대
The government decided to delay the festival by about a month to November based on the industry’s feedback that leveraging a year-end atmosphere would be more effective.

The retail industry panel will convene a meeting on Aug. 6 to finalize the program. The panel will be attended by heads of industry associations representing department stores, tax free shops, convenience stores and online stores.

By Chung Seok-woo and Minu Kim