The Game Rating and Administration Committee announced Tuesday it started reviewing any illegalities involved in the competition upon receiving complaints from users and others. Its findings will come out in one or two weeks from now, the committee added.

Rohan M is a mobile MMORPG adaptation of Rohan Online PC MMO, which tells the story of a world inhabited by different humanoid races at war with each other. It started the official service about a month ago. For the special launch event, a new 2020 Porsche Boxster was put for the first achiever of the top level. 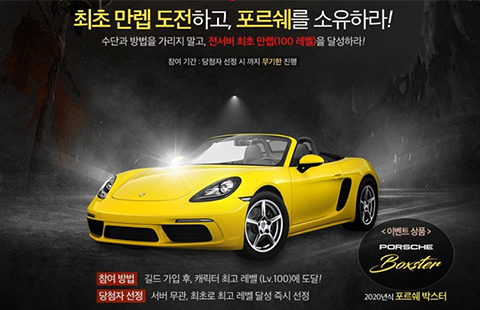 PLAYWITH shares also have rallied since the launch of Rohan M on June 28. The Kosdaq-listed stock skyrocketed to 53,200 won in just 10 trading days from 9,440 won a day before the release date. On Wednesday, the stocks rose 0.36 percent to close at 42,000 won in Seoul trading.

Critics say the Porsche reward encouraged users to spend more buying ephemeral in-game items and goods such as weapons for game characters. Currently in Korea, there is no price limit on giveaways, but the laws ban activities promoting “high-stake” gaming practices.

PLAYWITH argued it had sought legal advice before launching the event.

By Lee Sun-hee and Lee Ha-yeon