이미지 확대
The South Korean government is mulling to lower the surtax on the inheritance tax for the largest shareholder amid criticism that family businesses cannot last long in Korea because of the world’s heaviest inheritance levy.

The country charges a 50 percent inheritance tax for assets worth more than 3 billion won ($2.5 million), but additional 30 percent is levied when the largest shareholder holding more than 50 percent of entire stake in a large company inherits the assets, which pushes up the total tax rate to maximum 65 percent. For small- and mid-sized firms, the extra rate amounts to 15 percent. The rate is the highest among the Organization for Economic Cooperation and Development (OECD) member countries.

The Ministry of Economy and Finance and ruling Democratic Party have been in talks to halve the extra levy to facilitate generational changes in big chaebol names. The changes to the inheritance tax provision will be announced later this month. 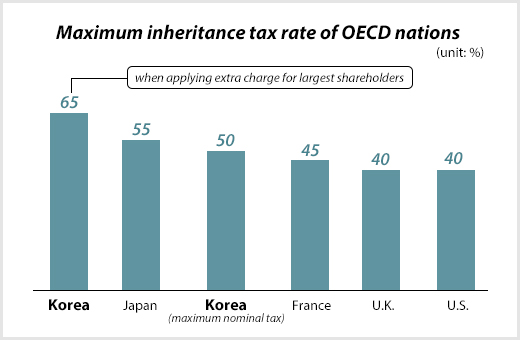 이미지 확대
A ranking official from the government said the decision was made as concerns are mounting that the extra high inheritance tax rate weighs heavily on businesses. Democratic Party lawmaker Choi Woon-yeol said the government is not entirely removing the additional charge for top shareholders but making an adjustment to make business management easier.

The tax revision would be made for the first time in 26 years since the government imposed extra charges on the biggest shareholders inheriting assets in 1993.

The government is expected to just lower the additional charges but maintain the current nominal inheritance tax rate. Inheritance and gift tax accounts for 1.5 percent of the total tax revenue in Korea, the second highest in the world.