South Korean President Moon Jae-in indicated the country won’t shy away from a head-on clash with Japan by criticizing its “unwise” move of using economic muscles to solve past historic issues.

The “unprecedented” action of tying historic issues with the economy is “extremely unwise that turns back the clock in the relationship of the two countries,” Moon said while chairing a meeting with presidential aides at the Blue House Monday. “In the end, it would be the Japanese economy that will suffer more,” he added.

Taking an aim at Korea’s core chip industry with export curbs is an “attempt to block” Korea’s economic growth, he said.

Moon has upped his rhetoric from last week when he had warned the government would have to take “necessary measures” if Japanese actions hurt Korean companies. 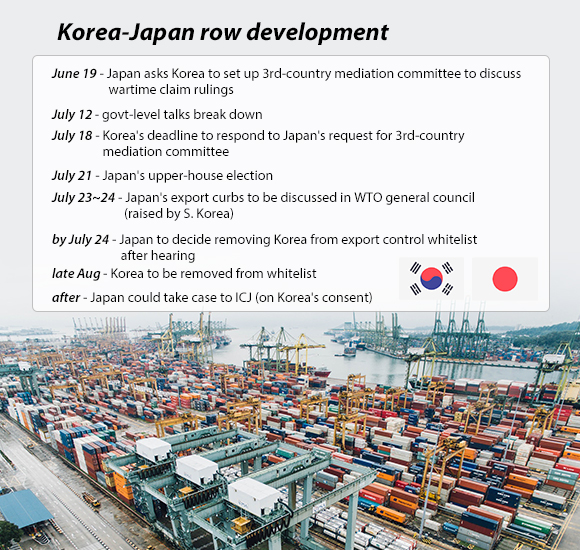 이미지 확대
On July 4, Japan tightened controls on exports to Korea of three key materials used in making chips and displays on security grounds. Its cabinet is also expected to review later this month on whether to remove Korea completely from the white list of countries that enjoy preferential treatment in export clearances of strategic items that can be dually used for commercial and military purposes.

Korean officials have denounced the export control as “retaliation” for Korean court rulings that ordered Japanese companies to compensate Koreans forced to work in factories and mines during World War II. Japan has vehemently opposed the rulings, contending that all claims were settled in the 1965 bilateral treaty.

Japan suggested setting up a third-party mediation committee to discuss the recent wartime reparation rulings, and has asked for Korea’s response by this Thursday. But the request is likely to go unanswered by the Moon administration, given its hard-line stance.