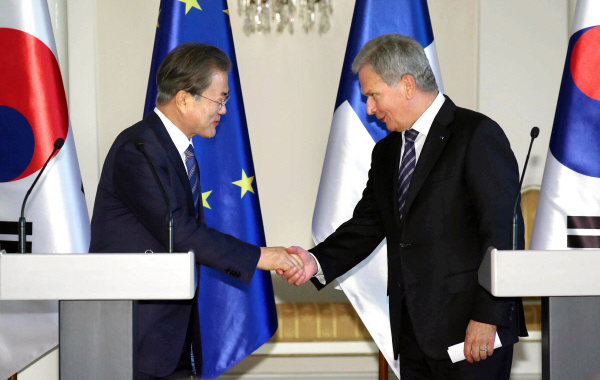 South Korea will build a startup center in Finland and Sweden to help fledgling Korean companies establish networks in the fast-growing startup hubs of Nordic Europe.

Korean President Moon Jae-in held a summit meeting with his Finnish counterpart, Sauli Niinistö, at the presidential palace in Helsinki on Monday (local time) to discuss areas for further cooperation in startup activities. Moon is on a weeklong tour around Northern Europe that will include state visits to Norway and Sweden.

Korea’s Ministry of SMEs and Startups and Finland’s Ministry of Economic Affairs and Employment agreed to set up Korea Startup Center (KSC) in Finland. The Korean ministry is expected to sign a similar memorandum of understanding with Sweden on Saturday.

KSC would be an office-sharing space that provides various networking programs for startups to facilitate communication with investors and other entrepreneurs.

“By installing KSC in the innovation hub of Northern Europe, we hope this would be a springboard for Korean startups to reach out to Europe and beyond,” said Park Young-sun, minister of SMEs and startups who was also in Helsinki as part of Moon’s entourage.

The two countries agreed to strengthen cooperation in future technologies including artificial intelligence, big data and the internet of things. They also agreed to work together in Arctic development and broaden their areas of partnership to include defense, energy and healthcare.

A new direct flight between Helsinki and Korea’s southern port city of Busan would also be launched next year.

Korea’s startup ministry is scheduled to hold a startup summit with related Finnish government officials in Helsinki Tuesday to explore ideas for creating a vibrant startup ecosystem in the two countries.