Overseas traveler spends $653 in Korea, most come for shopping and dining

이미지 확대
Shopping has been the biggest reason in bringing foreigners to South Korea, leading them to spend an average $653 during their stay, a poll on visitors found on Monday.

A foreign visitor to Korea spent at average $653, according to a poll by the nation’s leading budget carrier Jeju Air Co. on 1,056 non-Korean nationals on their return flight to home early last month,.

The item that topped the shopping list of the travelers from overseas countries was clothes at 54.5 percent and cosmetics came in second at 49.1 percent, based on multiple responses. Food ranked third at 33.5 percent. 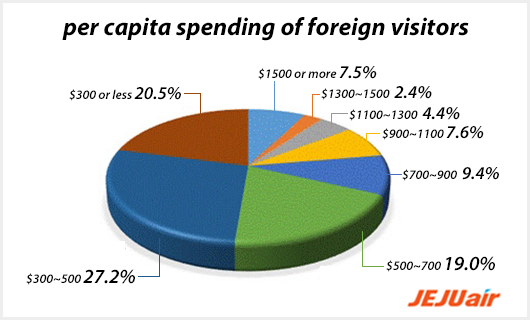 By nation, 57.3 percent of Japanese visitors bought clothes in Korea, followed by cosmetics at 55.7 percent and food at 55.3 percent. For Taiwanese visitors, watches came out on top at 73.9 percent, trailed by clothes at 71 percent and shoes 60.9 percent. Cosmetics were the most popular shopping item for travelers from China, Vietnam and Thailand.

The survey also found that about 86 percent of the respondents stayed in Korea for more than three days. Most of them came to the country for shopping and dining, with response rate reaching 59.3 percent 56.3 percent, respectively. A majority of 86.5 percent said they were satisfied with their travel experiences in the country and 91.2 percent said they are willing to revisit Korea later. Among them, 55.6 percent wanted to travel Seoul and its surrounding areas again, and 32 percent hoped to go to Jeju Island during their revisit.