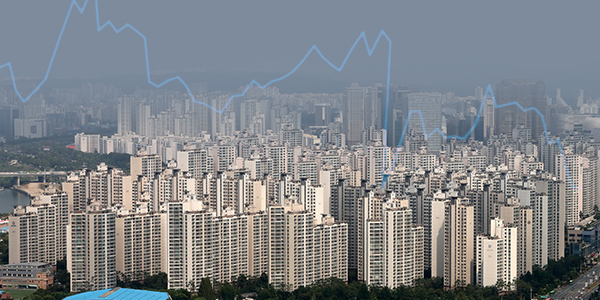 이미지 확대
Home prices in South Korea extended losing streak into the six month, although at a slower pace in May.

According to the data released by the Korea Appraisal Board on Monday, overall house prices across the nation in May fell 0.16 percent from the previous month, headed to the sought since last December. But the losing pace slowed down from 0.21 percent in April.

Housing prices in Seoul slipped 0.11 percent, extending losses for five consecutive months, but showing a smaller retreat than 0.18 percent fall a month ago. Prices dropped at a slower pace of 0.25 percent in Gyeonggi Province as well than 0.32 percent in April.

By housing type, apartment prices dipped 0.32 percent, slower than a 0.41 percent drop in April. Apartment prices in Seoul and its surrounding areas dropped slower than 0.40 percent in the previous month at 0.29 percent in May, due to signs of recovery in apartment reconstruction sites in Gangnam area and new towns such as Gwacheon and Gwangmyeong cities in Gyeonggi Province.

Prices of multi-unit houses in the country retreated faster at 0.15 percent than a 0.13 percent drop in April. The growth pace of stand-alone house prices edged up from 0.24 percent to 0.25 percent over the period thanks to the rising land prices.

Price drop of jeonse, rent paid with lump-sum deposit for a contract for two or more years, slowed down from 0.29 percent in April to 0.22 percent in May. Jeonse prices in Seoul fell slower at 0.10 percent than a 0.21 percent dip in April.

By Sohn Dong-woo and Choi Mira