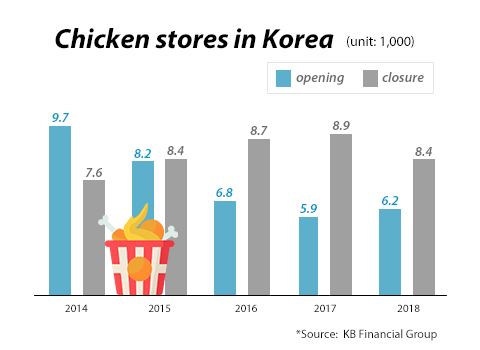 이미지 확대
Fried chicken has become an iconic part of South Korean life, but its ubiguity is having a dear economic price as fried chicken restaurant stores now close faster than they open in the saturated market, survey showed.

Thanks to the growing popularity of chicken in Korea, a chicken store has become an easy option for retirees starting own businesses to make living. The number of franchise fried chicken brands reached 409 in 2018, up by 25 from the previous year. BBQ runs the most number of shops across the country at 1,659 in 2018, maintaining the leading position for the fourth consecutive year since 2015. It was followed by BHC with 1,456 stores, Pelicana 1,176 and Nene Chicken 1,037.

The report said that the nation’s fried chicken market is expected to grow on the rising demand, but chicken restaurant owners would continue to suffer from low business due to the intensifying competition and rising costs.

By Kim Tae-sung and Choi Mira