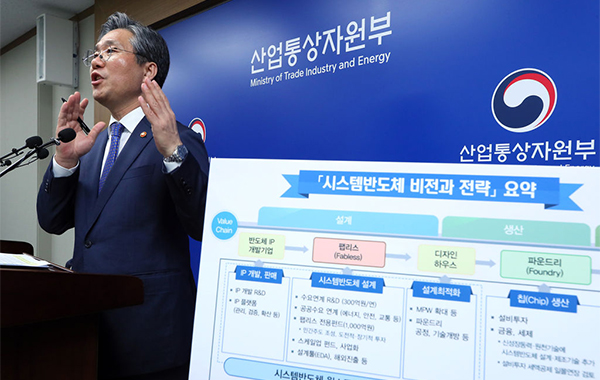 The South Korean government will provide a comprehensive support package for promising fabless firms as a part of the national campaign to nurture non-memory chip segment, Industry Minister Sung Yun-mo said during his visit to Nextchip, a local fabless company on Thursday.

The package will include state-funded programs to support technology development, explore marketing channels and manufacture prototypes, said the minister, adding the ultimate goal of the government’s vision to foster the non-memory industry is to create star companies like Qualcomm and NXP.

On April 30, the government announced a roadmap to intensify investments into fabless firms, key players in the non-memory chip industry, to raise the country’s market share to 10 percent in the global foundry market by 2030. The visit was made to show the government’s commitment to this vision. Nextchip founded in 1997 is an image signal processor developer and has shipped products to Korean and Japanese finished car and auto parts makers.

Under the plan, the government will spend about 1 trillion won ($840 million) on research and development projects for next-generation intelligent semiconductors over the next decade. Of these, 270.5 billion won will go the fabless industry related to technologies to design non-memory chips as application processors in the areas of automobiles, healthcare and smart home electronics.

Meanwhile, the country’s antitrust chief said the government will discuss related ministries to provide a measure to prevent large companies from taking intellectual property rights away from smaller firms as part of efforts to level the playing field in the market.

In a meeting with the executives of 15 mid-sized companies, Kim Sang-jo, the head of Fair Trade Commission urged large companies to stop awarding lucrative business contracts to their subsidiaries and improve transactions with smaller contractors.