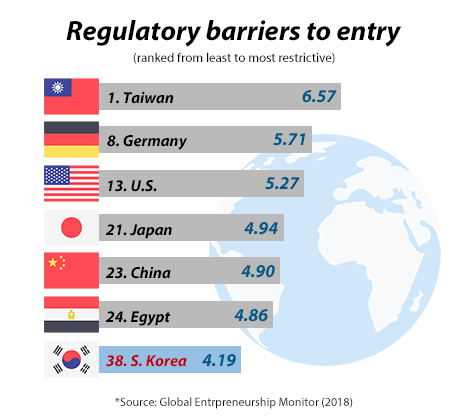 이미지 확대
South Korea has one of the highest entry barriers in the world, more closed against new innovations than China and Egypt, a study found.

Korea ranked 38th out of 54 countries in terms of regulatory restrictiveness against new industries, according to a Global Entrepreneurship Monitor study released in a report by the Korea Chamber of Commerce & Industry (KCCI) on Wednesday.

Korea’s ranking was lower than that of the United States, Japan as well as China and Egypt.

The KCCI in its report showed how Korea fared worse compared to other countries in various emerging sectors in medical, biohealth, ICT and finance. It cited backlash from established interests, positive regulatory system and timid administrative reforms as some of the major roadblocks to innovation.

Strong resistance from vested interests posed the biggest challenge, according to the KCCI. No matter how innovative, new industries failed to take off due to fierce opposition from existing businesses. New players were shut out from the market, especially in areas such as remote medical care and ride-sharing.

이미지 확대
Resistance was the strongest in Korea’s medical sector, the report said. Telemedicine has become common in Europe and the United States, transforming their healthcare landscape. In China, tech giants like Tencent and Baidu were actively embracing telemedicine and introducing new healthcare services. But in Korea, the technology was stuck in the pilot stages for decades because of opposition from the medical establishment.

A prime example of this was Korea’s regulations in direct-to-consumer genetic testing. The country had so far allowed the testing of only 12 traits, including weight and risk of premature balding, and recently added 13 more traits under the regulatory sandbox program. This was in stark contrast to Britain and China, which placed no such testing restrictions, and the U.S., which allowed testing in a much broader range of categories.