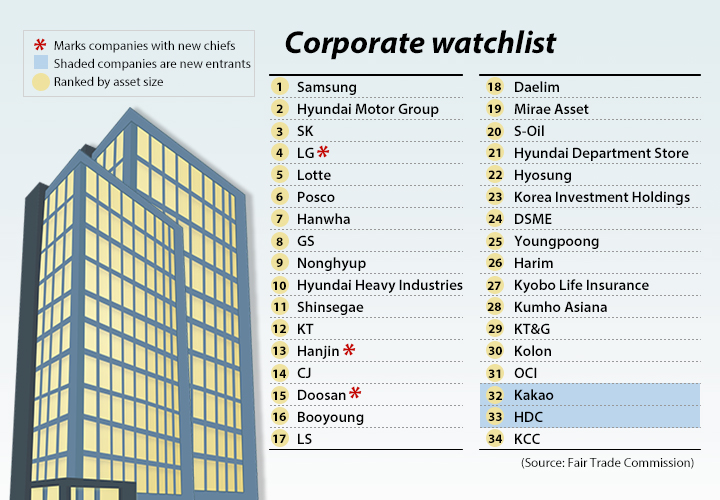 Kakao and HDC Holdings were newly added to the big-company watchlist of Korea’s antitrust agency, while Hanjin Chairman Cho Won-tae was recognized as the official chief of the transportation conglomerate after his father passed away.

The number of companies on the watchlist this year was 59, minus one from 2018. Aekyung and Daou Kiwoom newly joined the list, while Hanjin Heavy Industries, Hansol and Meritz Capital were removed after their assets shrunk from the sale of affiliates.

Of the 59 companies, 34 belonged to the 10-trillion-won corporate list, with two entrants added this year. They were Kakao, operator of Korea’s largest mobile messenger KakaoTalk, and HDC Holdings, a real estate development firm.

Hanjin, LG and Doosan saw a generational shift in their family-held businesses following the death of the owner chiefs.

In the case of Hanjin Group, the FTC exercised its authority to designate Cho Won-tae, chairman of the holding entity Hanjin Kal, as the group’s new representative. The transportation conglomerate was tasked with naming a new chief after the sudden death of its chairman Cho Yang-ho last month. But the company failed to settle on a name in time amid rumors of a family feud, causing the FTC to postpone its listing announcement.

By Yoon Jin-ho and Kim Hyo-jin