이미지 확대
South Korean watch time on YouTube jumped 50 percent on year in April as the Google-run video platform has become all-time favorite mobile app channel among Koreans from teens to over 50s amid feverish employment and popularity of single broadcasting.

According to local app analysis company WiseApp on Tuesday, 33,000 Android phone users consumed total 647 million hours on YouTube app in April, up 50 percent from a year ago. The average watch time on YouTube by a user rose 35 percent to 19 hours and 48 minutes, the largest among all apps. 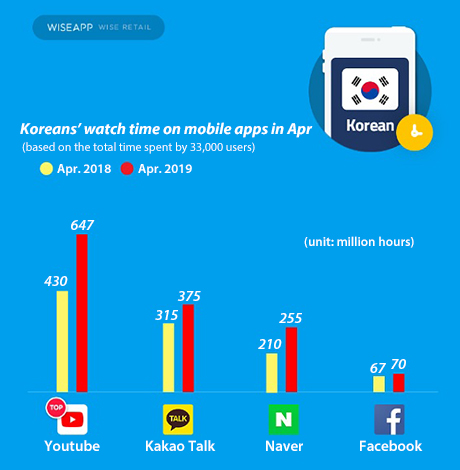 The surge in YouTube usage comes in line with burgeoning interest in video blogging on YouTube across Korea. Content creator YouTuber has emerged as a dream job for teenagers in the country, attracting not only teens but also those in older age groups to open their own broadcasting channels to share their own know-hows about everything ranging from beauty, toy, and cooking to legal and health issues.