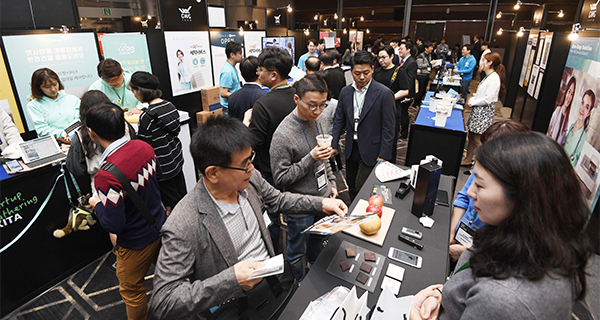 Participants are pictured receiving export consulting and enjoying other programs during `Startup Open Innovation` held at COEX in Seoul last October under the auspices of Korea International Trade Association and GS Group. [Photo by Lee Chung-woo]

South Korean startups attracted fresh investments at a faster speed than those in the U.S. or China last year but still lagged behind the two largest economies in terms of qualitative parameters such as successful exit and scaling-up, according to a report on Monday.

The report released by Korea International Trade Association’s research arm said South Korea posted a record 106 percent growth in annual investments into startups last year, beating the U.S. (21 percent) and China (94 percent) in expansion rate. The value of $4.5 billion stands pitiful against $99.1 billion in the U.S. and $113.1 billion in China.

Only 5.8 percent of 138 Korean startups that raised seed or angel money between 2013 and 2015 led to a successful exit through M&A or initial public offering opportunities. In contrast, the corresponding figure was 12.3 percent of 8,667 startups, the report said.

South Korea also delivered paltry performance in the number of unicorn firms whose value amounted to over $1 billion with a mere 1.4 percent of 138 startups versus 6.8 percent in China. The number of U.S. unicorns reached 30, albeit a fraction of its 8,667 startups.

By Lim Hyung-joon and Minu Kim