이미지 확대
Although the Korean won has dipped to its lowest in more than two years against the U.S. dollar, its loss is not excessive against the general declines in Asian currencies amid strengthening of the greenback, South Korea`s senior finance ministry official said, while vowing to take “timely” stabilization measures on signs of abnormalities in the FX market.

The impact of the ongoing U.S.-China trade war on the Korean economy is found to be “restricted,” given the foreign activity in local capital markets, said Lee Ho-seung, the first vice minister of economy and finance, while presiding a macroeconomic policy meeting on Monday.

The won has lost 5.6 percent so far this year, while the Japanese yen and Chinese yuan have fallen slightly over 6 percent.

“Foreigners have been selling stocks and buying bonds. Overall, there is no extraordinary activity,” Lee said. 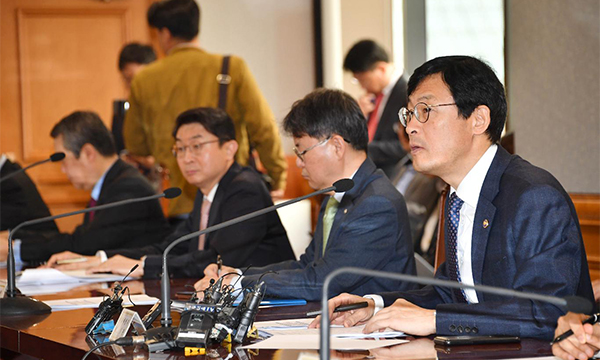 Lee Ho-seung, the first vice minister of economy and finance

After weeks of negotiations, U.S. and China trade talks fell apart last Friday without a deal. Washington immediately announced it would raise tariffs on $200 billion of Chinese imports to 25 percent from 10 percent. It also warned of new tariffs on an additional $300 billion of Chinese goods, which would affect nearly all imports from China. Beijing vowed retaliatory actions, but has yet to detail them.

He vowed to take decisive measures to stabilize the markets in times of extreme volatility but expressed confidence in Korea’s strong fundamentals. He added the government would constantly monitor local and international financial markets and hold regular meetings with related organizations to take swift action.