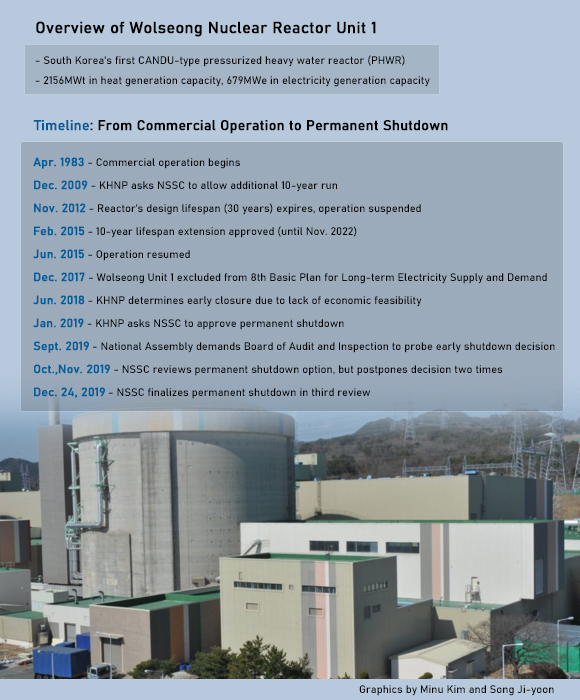 이미지 확대
Nuclear power experts have lashed out at South Korea’s Nuclear Safety and Security Commission for its decision to decommission Wolseong Nuclear Reactor Unit 1 although it still has another two years left in its legitimate life span, arguing the decision will pass over the burden of raising electricity bills and worsen air pollution from fine dust and greenhouse gases.

The commission endorsed the permanent shutdown of the reactor on Tuesday after two suspensions in the decision in October and November.

The Wolseong 1 reactor, which began commercial operation in 1983, was granted an extension to run until 2022 after reaching the end of its design life in 2012. But in 2017, the Moon Jae-in administration launched a nuclear phase-out policy that includes barring extensions on the life spans of outdated nuclear power plants and ditching plans to build new ones. The reactor’s capacity was excluded in the state’s eighth electricity supply framework plan announced late last year.

The reactor is the second one in Korea to be permanently suspended following the June 2017 shutdown of Kori 1.

The expert group of Korean professors involved in nuclear energy policy said in a statement that the decision to permanently shutter the Wolseong 1 reactor is outright ignorance of laws and institutions and the scientific community’s development of the world-class nuclear power technology.

It also questioned the legitimacy of the plan because it was made even when the Board of Audit and Inspection is still probing the feasibility of early closure of the reactor and possible dereliction of duty of executives at Korea Hydro & Nuclear Power (KHNP), the Wolseong plant operator.