Second Jeju airport project on brink of collapse due to environmental, residential strife 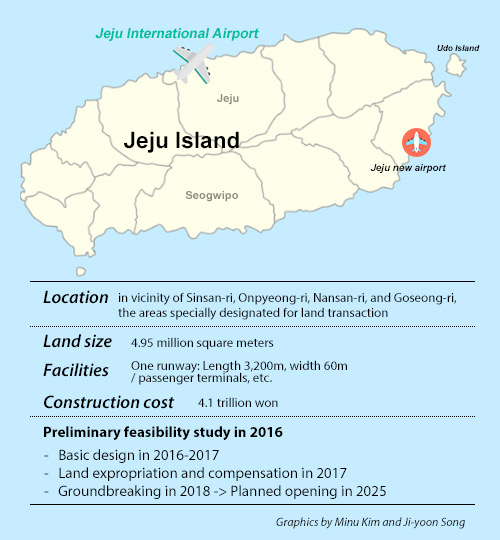 이미지 확대
The project to create a second airport in Jeju island at Seogwipo City has hit another setback after the environment ministry on Thursday suspended the plan citing more improvement in noise and bird clash issues.

The refusal was a response to the transport ministry’s latest strategic environmental assessment which was renewed after being turned down about a month ago. In October, Korea Environment Institute under the Ministry of Environment said that the designated Seongsan area in Seogwipo is not suitable for a new airport site because it is a large habitat for migratory birds with a high risk of bird collision with aircraft and, and it has high value as a natural ecological conservation area.

The Ministry of Land, Infrastructure and Transport has hastened the second Jeju airport project, which was a campaign promise of President Moon Jae-in, but the subsequent refusal by the environment ministry will make a delay in construction inevitable. The 4.87 trillion won ($4.18 billion) construction plan scheduled to begin in 2021 for completion in 2025 face other challenges such as strong protests from local residents and environmental civic groups.

The island’s provincial assembly recently launched a special committee to resolve resident conflicts over the airport construction. The assembly plans to collect feedback from residents in January-March next year and submit its resolution based on citizens’ opinions to the National Assembly in April. Unlike other provincial governments, the construction project in Jeju with sovereignty in governance cannot be carried out without the consent from the Jeju assembly.

By Kim Yeon-joo and Minu Kim