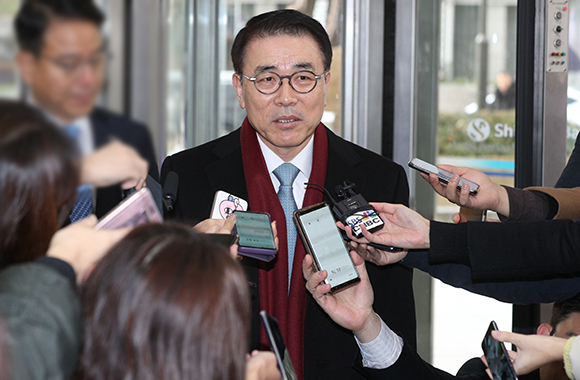 이미지 확대
South Korean prosecutors on Wednesday filed for a three-year jail term for Cho Yong-byoung, chairman of Shinhan Financial Group who was recently nominated to a second term to head the top financial group, on charges of favoritism in hiring.

Prosecutors noted that it is highly competitive to get into Shinhan Bank, the country’s top financial institution and one of the most preferred workplaces by young people due to job security and high annual pay, and yet, defendants interfered with hiring procedure by manipulating results of underqualified applicants that would otherwise not have been accepted under fair competition.

Investigators also said that Cho and Yoon demoralized honest applications who had prepared hard to get into the top financial institution.

In his final statement at court, Cho, who was recommended to serve another three-year-term as chairman last week, denied he knew of job applications of children of company members or passed disqualified applicants.

Prosecutors, meanwhile, also sought an up to one year and six months jail term for two former managers and three other employees responsible for personnel hiring at Shinhan Bank from 2013-2016. The first trial is due on Jan. 22.