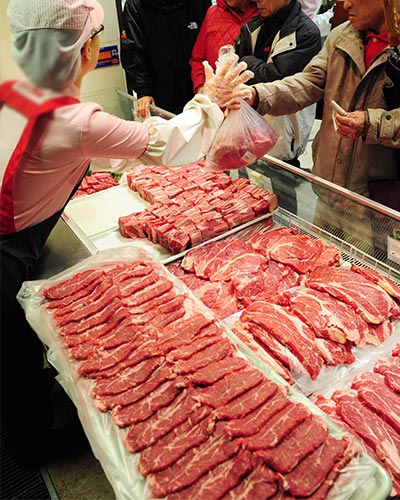 이미지 확대
U.S. beef has taken up more than half of the imported beef market in Korea at the end of October as price appeal has completely erased safety concerns.

According to data from the Korea International Trade Association (KITA) on Monday, the country imported 209,034 tons of beef from the U.S. from January to October, up 7.9 percent from the same period last yea

Total beef imports amounted to 415,112 tons from the period, of which the U.S. products accounted for 50.4 percent. The share surpassed the 50 percent threshold for the first time since 2003 when beef imports from the U.S. were banned in Korea after an outbreak of mad cow disease in the U.S.

The value of U.S. beef imports reached $1.54 billion during the period, up 10.4 percent from a year ago. The figure is expected to reach a record high for four years in a row this year since 2016.

Due to the rise of U.S. products, Australian beef that had dominated the nation’s imported beef market from 2004 to 2016 kept its losing streak. Beef imports from Australia fell 1.1 percent on year to 175,082 tons from January to October and imports from New Zealand plummeted 13.5 percent to 18,037 tons.

U.S. beef had long been the No.1 import beef since 1994 with its share reaching 68.3 percent in 2003, but its sales fell sharply since Korea imposed an import ban in 2003 following the mad cow disease outbreak. The ban was partially lifted in 2008 to allow imports from beef from cattle under 30 months old after a long negotiation, but Korean people waged a massive protest to oppose the import resumption on safety concerns.

But U.S. beef imports rapidly grew following the free trade agreement between the U.S. and Korea. The import is expected to increase more than seven-fold this year from 32,446 tons in 2008 after reaching 224,186 tons in 2018.