South Korean trading firms have set eyes on the bourgeoning food industry for growth as the industry continues to expand overseas and food security has become more important domestically.

According to multiple industry sources on Thursday, POSCO International Corp., the trading arm of Korea’s largest steelmaker POSCO, has exported 2.5 million tons of grains through the export terminal it operates at a port in Mykolaiv in Ukraine. Grains, including corn, wheat, and soybean are shipped to not only Korea but also Europe, North Africa, and the Middle East.

POSCO International in September last year brought in 61,000 tons of corn to Korea from Ukraine. The company also manages a rice processing complex in Myanmar.

“POSCO International is the only among local trading companies that is a member of the London-based Grain and Feed Trade Association (GAFTA),” said an unnamed official from the company. “We are aiming to become one of the world’s top 10 companies engaged in comprehensive food business by expanding trade volume of grains to 25 million tons from 8 million tons by 2030.”

There are trading companies that have rolled up their sleeves to personally engage in crop growth.

Hyundai Corporation Holdings has advanced into overseas markets on the back of support from its chairman Chung Mong-hyuk. 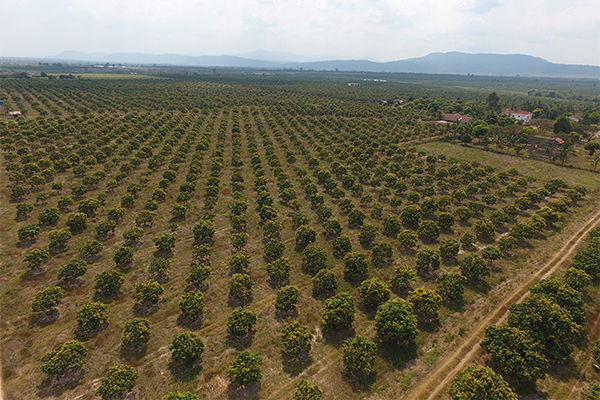 The company purchased 153 hectares of agricultural land near Phnom Penh, the capital of Cambodia, in 2015, to manage a mango farm. [Source : Hyundai Corporation Holdings]

The company purchased 153 hectares of agricultural land near Phnom Penh, the capital of Cambodia, in 2015, to manage a mango farm. Hyundai Corporation built an agricultural retail center with vaper heat treatment quarantine facility in 2020. It is hoping to establish a value chain that encompasses a network of mango production, retail, and exports.

Hyundai Corporation Holdings plans to expand into more markets such as China, ASEAN, EU, and the Middle East, and diversify items.

“We will build more production facilities through additional investment and engage in mushroom business in the U.S.,” a Hyundai Corporation official said.

LX International manages three palm farms in Indonesia. The 21,500 hectare farm is equipped with its own palm oil production facility. LX International is involved in the annual trade of 600,000 tons of palm oil.

Samsung C&T has also acquired a 20,000-hectare palm farm in Indonesia in 2008. It has facilities that can produce up to 100,000 tons in palm oil per year for exports to Southeast Asia.

By Seong Seung-hoon and Han Yubin