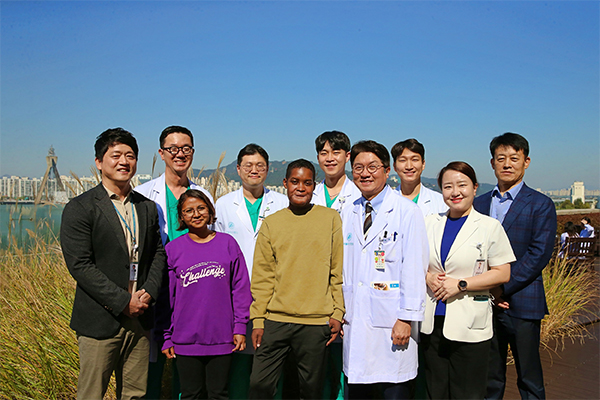 Flangie and Professor Jong-Woo Choi(front row, third and forth from the left) of Asan Medical Center taking a commemorative photo before Flangie‘s departure. [Source : Asan Medical]

A young man from Madagascar has regained a smile on his face after a 15-centimeter tumor protruding from his mouth was successfully removed at Asan Medical Center in Seoul, Korea. The man named Flangie, 22, had been bullied as a person with a gruesome lump on his face in the neighborhood.

Madagascar is the world’s fourth largest island country located in the southeastern part of Africa. It is one of the countries that lacks healthcare resources and people in some rural areas have limited access to electricity.

Flangie had molar tooth pain when he was 8 years old. His mother pulled his tooth out, but probably due to a problem in tooth extraction, inflammation began to occur in the extracted molar area. However, due to lack of proper medical facility nearby, it had been left unattended for about 10 years.

The inflammation, which was small in the beginning, increasingly grew into a giant cell reparative granuloma. It is a rare disease, known to develop in one out of every 1 million people. The initial condition can be easily controlled with pharmacotherapy, but in Flangie’s case, the tumor grew and protruded from his mouth due to a delay in treatment. Flangie had difficulty in talking and eating. He bled frequently when the tumor was touched or mistakenly hit, making his life more difficult.

Photos of Flangie from Madagascar, an island nation in southeastern Africa, before(left, May 2022) and after(right) surgery [Source : Asan Medical]

Friends began to intimidate Flangie, calling him ‘a child with a gruesome lump’ or ‘a haunted child’ due to the huge tumor, forcing him to quit school.

Flangie lives in a village called Ambavala, about 2,000 kilometers from Antananarivo, the capital of Madagascar. There is no road leading to the village. The remote area can be reached only by walking for about two days. There is no electricity in the village and residents depend on fire light. Also, there is no hospital and doctor facility nearby.

A small hospital can be accessed three hours on foot from the village, but even there, only one doctor cares for patients. Flangie had visited the hospital with hope but received a hopeless answer from the doctor: “There is nothing I can do for you.”

In early 2021, Dr. Jae-hoon Lee, who served as a medical missionary in Madagascar, accidentally found Flangie, whose condition was undertreated for more than a decade. Dr. Lee judged that his tumor was difficult to treat in Madagascar. Dr. Lee contacted several Korean hospitals for treatment and Asan Medical Center readily responded. Dr. Lee has a close tie with Asan Medical Center as he won the ASAN Award from the Asan Foundation in 2018.

Flangie, who had not even been registered for birth in his country, had to prepare for about a year to leave for Korea. He eventually arrived at Asan Medical Center on Aug. 31 after a 20-hour flight.

On Sept. 16, the hospital team performed more than eight hours of surgery to remove Flangie’s giant tumor, which was as big as his face. The team also rebuilt his lower jaw, which was not functioning properly due to the tumor, using Flangie’s calf bone, and aligned his mouth and lips. 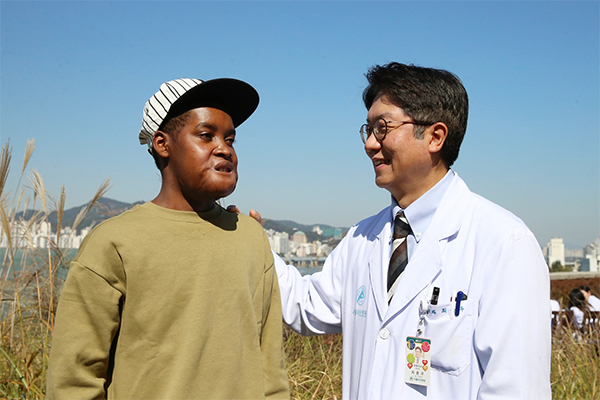 Flangie was worried about whether he would be able to endure a long surgery due to his poor nutritional condition, but he safely turned the corner. He regained health with a bright smile on his face and returned home on Nov. 5.

Treatment expenses of Flangie were fully supported by the Asan Foundation and Asan Medical Center.

“I am so grateful to the medical staff at Asan Medical Center for making my face normal again, which could not be cured in Madagascar, and being warm and caring like a family,” Flangie said. “I was frustrated I had to live with a lump in my mouth for the rest of my life, but on hearing that surgery was possible, I had a dream for the first time. I want to be a missionary and be a person who can deliver hope to people who are in similar situations.”

“Our team has accumulated know-hows through years of facial deformity treatment, but in the case of Flangie, we were worried whether Flangie would be able to withstand general anesthesia,” said Professor Jong-Woo Choi, who led the surgery. “Also, the tumor size was larger than we had thought. I am glad to see Flangie recovering well and leaving the hospital in good health. I hope he will overcome the psychological barrier caused by a facial deformity and live a life full of confidence and smiles in the future.”