Beer price to rise further due to higher tax in April 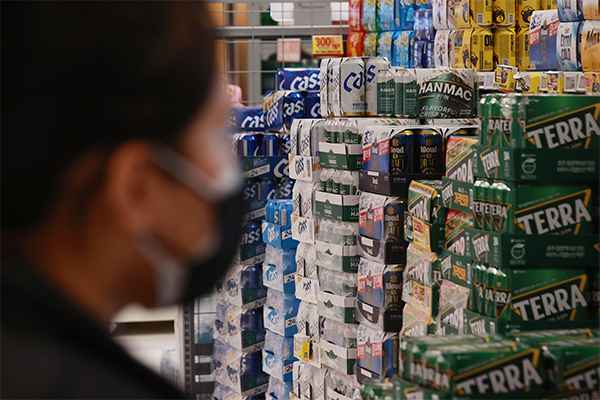 The price of beer is expected to rise again due to an increase in liquor tax, adding pressure on consumers’ spending and the country’s inflation.

Starting from April 1, liquor tax on beer and rice wine will rise by 3.57 percent, or 30.5 won ($0.02) per liter, from last year, according to a revised enforcement ordinance for the Individual Consumption Tax Act and the Liquor Tax Act announced by the Ministry of Economy and Finance on Wednesday.

The liquor tax rate on beer and rice wine has been adjusted for the inflation rate of the previous year since 2020, when the government made a shift from value-based to volume-based taxing.

Last year, consumer prices soared to 5.1 percent, the highest level in 24 years. The government decided to raise the liquor tax by 3.57 percent, which is 70 percent of the inflation rate. The government can adjust the tax increase range between 70 and 130 percent of the inflation rate, but the lowest end was selected this time in consideration of the burden on consumers, the ministry said.

Meanwhile, from July, individual consumption tax on the purchases of Korean-made cars will be lowered by 200,000 to 300,000 won, and levy on expensive non-member golf courses will increase.

By Hong Hae-jin and Minu Kim