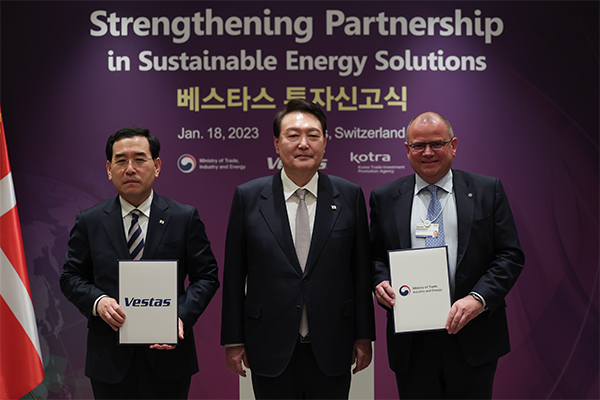 Vestas Wind Systems A/S, a Danish wind power giant, plans to invest $300 million in South Korea and relocate its Asia Pacific headquarters from Singapore, according to sources on Wednesday.

The plans were announced in an investment report event in a hotel in Davos, Switzerland, which was attended by Korean President Yoon Suk-yeol, Minister of Trade, Industry and Energy Lee Chang-yang, and Vestas CEO Henrik Andersen.

Yoon is in Davos to attend the World Economic Forum. He has taken the trip as an opportunity to promote Korea as an attractive investment destination.

“(The investment) is significant as it will allow Korea to make a leap to become a wind power production hub in the Asia Pacific region and has allowed the country to find a new export engine,” Yoon said.

Vestas is the world’s largest wind turbine company that supplies more than 160 gigawatt (GW) capacity globally. The company is in partnership with many of Korean enterprises, including Korea South-East Power Co. and Sejin Heavy Industries Co.

Merck Life Science said Korea is one of the candidates to build a new bio subsidiary materials production facility.