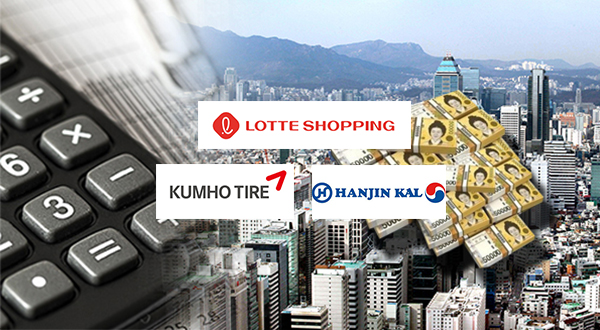 이미지 확대
South Korea’s retail giant Lotte Shopping and transportation mogul Hanjin KAL remain on the list of marginal firms that can’t pay interests on debt from earnings as they have not fully recovered from the pandemic fallout due to dramatic shift to high interest rate environment.

According to financial market tracker FnGuide on Wednesday, 479 companies – 33 percent out of the total 1,453 companies – recorded an interest coverage ratio of less than 1 during the second quarter. Companies with a market cap of more than 1 trillion won such as Lotte Shopping, Kumho Tire, and Hanjin KAL are also on the blacklist.

Lotte Shopping had an interest coverage ratio of 0.62, Kumho Tire 0.08, and Hanjin KAL 0.07, with all three showing an ICR lower than 1 for three consecutive years.

Out of the 479 companies, 405 recorded operating deficits.

An interest coverage ratio measures how well a company can pay the required interest payments with their earnings. An ICR below 1 means that the company’s current operating profit is not enough to even cover interest payments. Companies with an ICR under 1 for three consecutive years are considered marginal firms.

Lotte Shopping has been unable to meet the required interest rate payments since 2018 with its earnings after it has failed to transition into an online business during the Covid-19 pandemic. But its operating profit turned to the black for the first time in three years during the second quarter this year, helping its ICR rise to 0.62 from 0.01 in the second quarter of 2020. It is expected to see its ICR recover to 1 during the third quarter this year.

The operating profit of Kumho Tire, which was acquired by China’s Doublestar Tire in 2018, has been on the steady decline, falling to 1.8 billion won ($1.27 million) during the second quarter this year from 11.4 billion won a year earlier. Its ICR plunged from 0.58 to 0.08 over the same period.

Hanjin KAL, the parent of South Korea`s No. 1 full-service carrier Korean Air Lines, also has an ICR lower than 1 at 0.07 after posting a deficit during the second quarter of both 2020 and 2021.

Other companies such as Korea Electric Power Corporation (KEPCO) with an operating loss of 6.5 trillion won, as well as Samsung Heavy Industries, HLB, and Paradise Group suffered even larger operating deficits for three consecutive years during the second quarter.

By Park Yoon-ye and Susan Lee