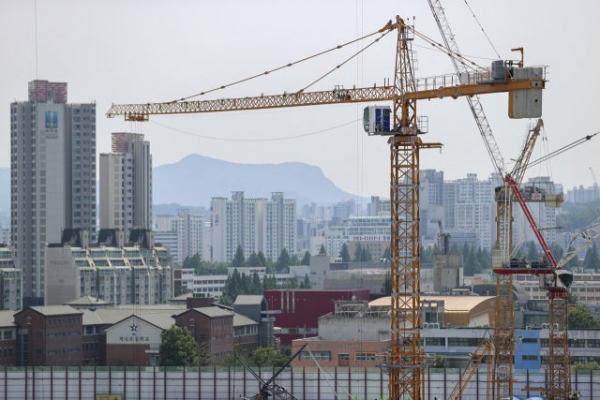 Korean major builders have been grappling with shortage of supplies and high prices of commodities like cement and steel on top of housing slump at home, but with some exceptions with building orders from overseas.

According to disclosures with the Financial Supervisory Service (FSS) on Monday, the construction unit of Samsung C&T posted an operating profit of 310 billion won ($237 million) in the first six months this year, up 25 percent from the same period last year. Sales rose 17 percent to 6.37 trillion won.

Key drivers were overseas projects such as airport construction in Taiwan and Bangladesh and high voltage direct current (HVDC) construction in the United Arab Emirates (UAE) plus the construction of Samsung Electronics’ Pyeongtaek plant in Korea.

Lower position in the housing market has worked better for Samsung C&T.

Sales from its residential building business account for 11 to 12 percent of the total, which is much lower compared to its competitors, said Daol Investment & Securities.

Samsung Engineering, another builder affiliate under Samsung Group, saw its operating profit jump 27.3 percent to 327.8 billion won over the same period over sales of 4.65 trillion won, up by 44.3 percent. Samsung Engineering is not involved in housing business, and sales from overseas markers take up 60 percent of its total revenue. Samsung C&T and Samsung Engineering are the top two players in overseas project wins among Korean builders with $4.99 billion and $2.39 billion, respectively, this year.

In contrast, housing-oriented Daewoo Engineering & Construction reported a 27 percent drop to 307.7 billion won in first-half operating profit over sales of 4.69 trillion won, up 13.1 percent from a year ago. For its most recent quarter, the builder’s operating profit plummeted 55.1 percent to 86.4 billion won. The decline is attributable to an overall increase in construction costs along with an increase in raw material prices, the company said. Daewoo Engineering & Construction’s sales from housing business represented 66 percent as of the end of June.

By Park Joon-hyung and Minu Kim