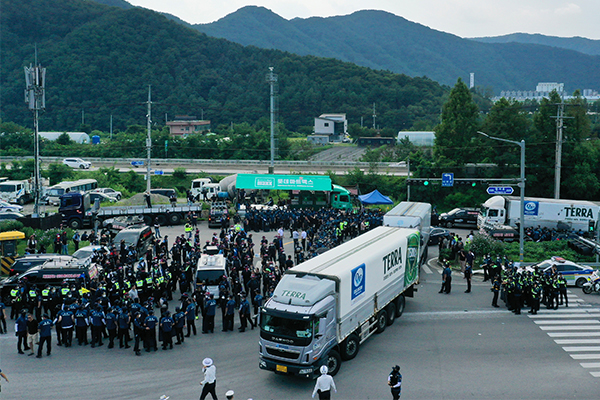 South Korea’s top liquor maker HiteJinro Co. on Monday has been able to renew shipping at its Gangwon plant responsible for most of its popular beer lineup during summer peak season by dispatching headquarters staff to normalize shipments disrupted for a week from a sit-down strike by lorry union.

According to multiple industry sources Monday, HiteJinro staff from headquarters led a chain of trucks to load beer boxes from its factory in Hongcheon, Gangwon Province under police guard after managing to open the gateway that had been blocked by truck owners belonging to the Korean Confederation of Trade Unions. There had not been any physical collision.

The aim is to take out the daily capacity of 120,000 boxes. Gangwon brewery rolls out the company’s bestselling beer brands Terra, Hite Lite, Max, and FiLite.

The liquor company has placed 30 cargo trucks in front of the factory as part of Plan B that involved entering into delivery contract with others.

HiteJinro has been facing delivery setback since the cargo union on August 2 went on a strike in front of the beer factory in Hongcheon. The factory’s delivery rate fell to as low as 29 percent due to the fierce strike.

HiteJinro on Sunday told reporters that it will inject 250 employees from the headquarters and factory to secure gateway for delivery with help from police.

The move comes as the strike is incurring massive losses as the beer producer was unable to deliver even minimum products to businesses and consumers in peak summer season.

The factory in Gangwon makes fresh, can, and bottle beers and delivers up to 120,000 boxes a day, according to reports. HiteJinro was not able to deliver beer at all over the weekend.