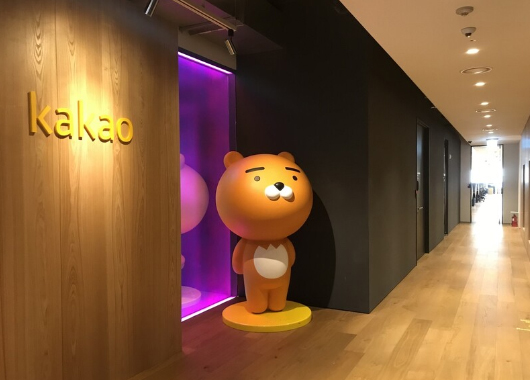 Korean mobile platform giant Kakao made a modest income gain in the second quarter on stable revenue from existing apps and flouring content services despite aggressive spending to expand global presence and skirmish with Google over in-app purchase fee.

Kakao on Thursday reported a consolidated operating income of 171.0 billion won ($130.8 million) for the second quarter ended June 30, 2022, rising 7.8 percent from the previous quarter and 5.2 percent from a year earlier.

Growth was even across the board.

It expanded with an added feature of Open Chat, which lets a user join a chat room by clicking a link that can be shared on social media and other online channels. Open Chat already has attracted 9 million active monthly users without any special promotional events, said Kakao Chief Executive Officer Namgoong Hoon at the conference call. The company is planning to separate out Open Chat as an independent app, he added.

The Portal Biz contributed 102.4 billion won in revenue, down 10 percent on quarter and 18 percent on year.

Other platform services delivered 375.1 billion won in revenue, up 21 percent on quarter and 52 percent on year, mainly due to higher income from mobile wallet Kakao Pay. Kakao T, running taxi-hailing and other transportation-related services, also saw an improvement in demand. The company has been testing Zigzag Global, its fashion-beauty online store platform targeting overseas consumers, in July ahead of its official launch in September, Kakao Chief Investment Officer Bae Jae-hyun said, joining the conference call. 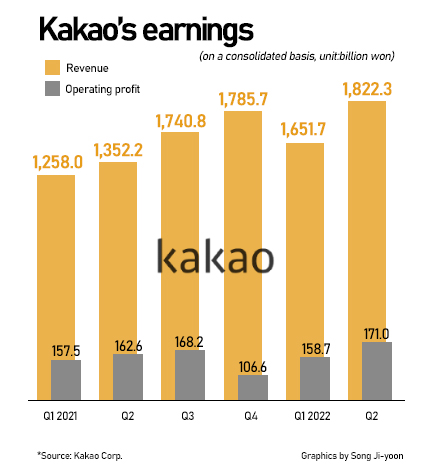 이미지 확대
The content division, overseeing game to cartoon services, recorded 891.7 billion won in revenue, up 16 percent on quarter and 51 percent on year.

The Story, servicing digital cartoons delivered 227.6 billion won in revenue, down 5 percent from the previous quarter, as weak Japanese yen hurt its revenue from its web cartoon operation in Japan. Against a year-ago, sales gained 22 percent.

The Story platform’s gross merchandise value from overseas expanded by nearly 80 percent, according to Bae. The monthly user count of Piccoma, its e-comics service in Japan, has exceeded 9.5 million and the monthly transaction amount hit a record high of 8 billion Japanese yen ($60 million)

Game business delivered 336.8 billion won in revenue, up 37 percent on quarter and a whopping 162 percent from a year ago, primarily due to additional incomes from the Taiwan market roll-out of “Odin: Valhalla Rising” and the launch of “Uma Musume Pretty Derby” in Korea.

Kakao estimated its operating expense at 1.65 trillion won for the second quarter, up 11 percent on quarter and 39 percent on year. The increase is mainly due to marketing costs for the global expansion of its content business.