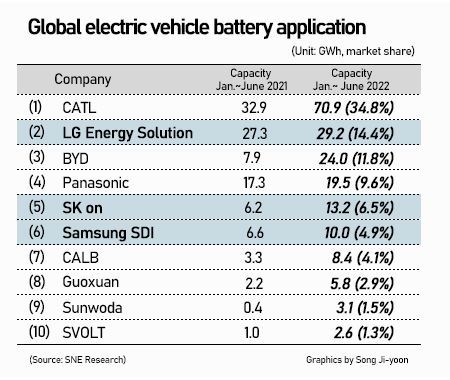 이미지 확대
South Korean battery majors LG Energy Solution, SK on, and Samsung SDI continued to lose their share in the global electric vehicle battery market during the first half of the year due to the rapid rise of Chinese battery makers.

According to energy market watcher SNE Research on Tuesday, South Korean battery makers were behind 52.4 GWh of 203.4 GWh power capacity in electric vehicles on the roads worldwide in the January-June period to make up 25.8 percent, off from 34.9 percent a year ago.

LG Energy Solution kept to No.2 but its market share sank to 14.4 percent as of June from 23.8 percent a year ago. SK on, ranked fifth, saw its share pushed up to 6.5 percent from 5.8 percent.

Samsung SDI trailed behind at sixth, falling 0.9 percentage points from a year earlier to 4.9 percent.

Chinese battery firms such as CATL, on the other hand, recorded three-digit growths in share amid fast expansion in the Chinese EV market. The No.1 battery maker CATL’s market share gained 6.2 percentage points to 34.8 percent, and BYD, ranked third, rose 5 percentage points to 11.8 percent.

Panasonic - the only Japanese company to be included in the top 10 - also lost 5.4 percentage points from the previous year to 9.6 percent to make fourth.

“The electric vehicle market is showing steady growth, especially in China, for the 24th month despite Covid-19,” said SNE Research. The three Korean battery giants must come up with a strategy to take advantage of the continuously growing Chinese market, the market watcher added.