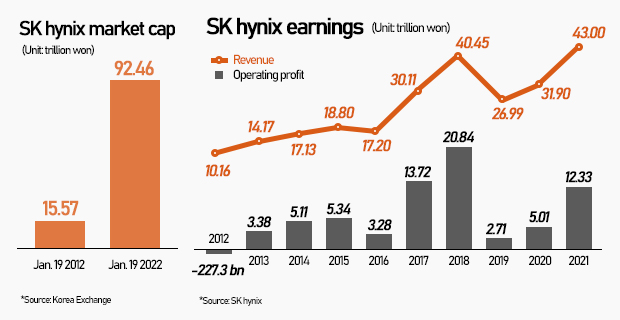 이미지 확대
Over the 10 years SK hynix has become a part of SK Group, the chipmaker has turned around nicely as the world’s third largest in terms of sale after Samsung Electronics and Intel and the most important flagship for the conglomerate that helped transformation from energy and wireless to a global IT components and materials powerhouse.

February 14 marks the 10th anniversary since the former Hyundai unit Hynix Semiconductor joined the SK family at a cost of modest 3.5 trillion won ($2.9 billion). SK would not have imagined the chipmaker would become the second most expensive Korean company with market cap at 90 trillion won.

Many had been skeptical if the chipmaker mired in losses for a decade amid chip slump would catch up after lagging behind by years in upgrades in chip processing.

But under eager grooming from SK, the company turned around from the fourth quarter of 2012 and has since sustained growth in the bottom and top line except for down cycles in 2016 and 2019.

The payroll count surged more than 50 percent from 19,601 in 2011 to 30,000 last year. It has kept up earnings hot streak, raising fresh record quarterly earnings in the third quarter last year with 4.17 trillion won in operating profit on sales of 11.8 trillion won.

Park Jea-gun, professor of electronic engineering at Hanyang University, said that chip industry calls for much early investment and that SK hynix was able to grow on SK Group’s solid financial support. Chip demand also soared after the takeover following the era of smartphones, he said. 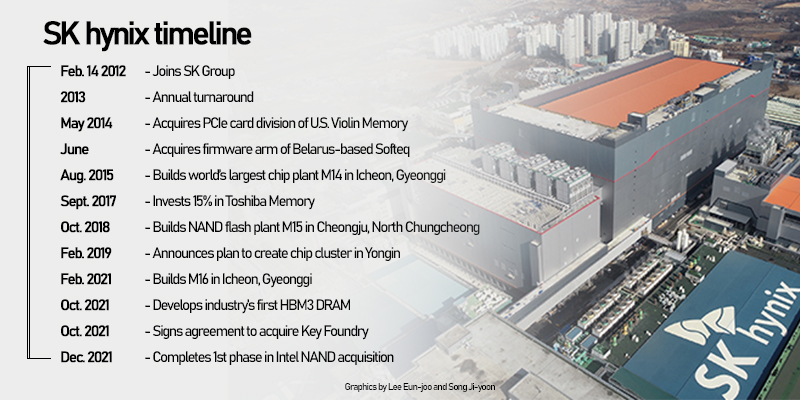 이미지 확대
SK hynix has been readying for another leap by expansion in the United States and China. Upon clearance of M&A, SK hynix delivered first phase of $9 billion funding to command over Intel’s NAND business in the U.S. and China.

Lee Seok-hee, president and chief executive of SK hynix announced goals to expand presence in U.S. market this year. The company newly created a business entity dedicated to the Americas and is readying construction of a large-scale R&D center.

SK hynix plans to continue to expand its production line in China. The company plans to boost its DRAM facility in Wuxi backed by an addition in NAND flash facility in Dalian through Intel purchase.

Once SK hynix completes its foundry line in Wuxi, the company will be capable of local production in all three fields – DRAM, NAND, and foundry.

Its Wuxi plant will become a production base with more than 100,000 8-inch wafer monthly production once refurbishment is complete.