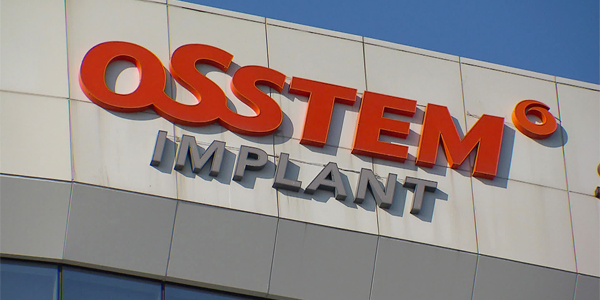 이미지 확대
Osstem Implant Co. under investigation by law enforcement and financial authorities for fraud and mismanagement following a major employee embezzlement scandal may have to be sold to save South Korea’s industry No.1 from delisting and going under.

The management may have to be replaced as police has expanded investigation to Choi Kyoo-ok, chairman and the largest shareholder of Osstem Implant for implication in the company bookkeeper’s embezzlement of 220 billion won ($184.6 million). Choi, along with Osstem Implant CEO Um Taek-kwan, is also charged for breach of trust.

If top management is found liable, the Korea Exchange reviewing delisting of the Kosdaq stock could demand replacement of the large shareholders as a condition to lift the trade suspension.

The stock of the dental implant maker has been suspended since it disclosed on Jan. 3 that its employee had embezzled corporate fund nearing its equity capital.

When another Kosdaq-listed biotech firm SillaJen Inc.’s stock trading was suspended last year after former and sitting executives were accused of embezzlement and breach of duty, KRX also demanded replacing the largest shareholder.

Choi owns 20.61 percent in Osstem Implant. He would have to sell his holdings or dilute them through rights offering to replace the largest shareholder. Rumors have been going around in the investment bank community that he is contacting private equity funds to tap the sale.

The company itself is sound. Established in 1997, Osstem Implant is No. 1 dental implant brand in Korea with a 50 percent share in the local implant market. It is the fourth largest player in the world.

By Cho Yoon-hee and Cho Jeehyun