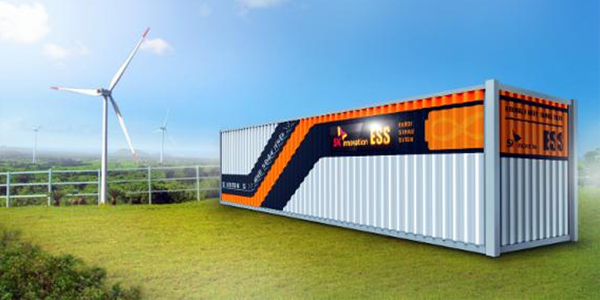 SK Innovation has developed a heat transmission prevention technology that can block the spread of fire inside a battery pack, making a breakthrough in the lithium-ion battery energy storage system (ESS) market that has been marred by a slew of battery pack fire incidents.

According to SK Innovation on Tuesday, the company has filed for registration of patents for its fire prevention technology in energy storage systems at home and abroad, while its proprietary E-pack technology designed to prevent fire spread in EV batteries is about to be applied to mass production.

SK Innovation has become the first Korean company to come forward with the test-proven technology that prevents fire from spreading from one malfunctioning cell to neighboring cells inside a battery pack, said a high-ranking government official, adding that such a fire transmission suppression technology is the key to the growth of the ESS market.

When a fire occurs in an energy storage or EV battery systems, it usually takes about 30 seconds to 5 minutes for the fire to spread from one cell to the surrounding cells. SK Innovation used thermal shielding packaging to fundamentally block this, according to the company.

But the company’s lab tests showed that with the latest technology, only one battery cell that caught fire burned for 1-2 hours, and the rest of the battery cells operated normally without voltage abnormality.

This technology enables to load batteries in large quantities while reducing the fire safety risk, which is expected to improve energy storage efficiency and reduce installation costs, the company explained.

According to market tracker SNE Research, the global energy storage system market is expected to grow rapidly at an average annual rate of 43 percent from 11.1 GWh in 2019 to 94.2 GWh in 2025. Energy market research firm Bloomberg NEF also projected that the global ESS market will grow at an average annual rate of more than 37 percent, reaching 358 GWh between 2019 and 2030.