Hyundai, Kia, Genesis connected car service brands to be integrated into one 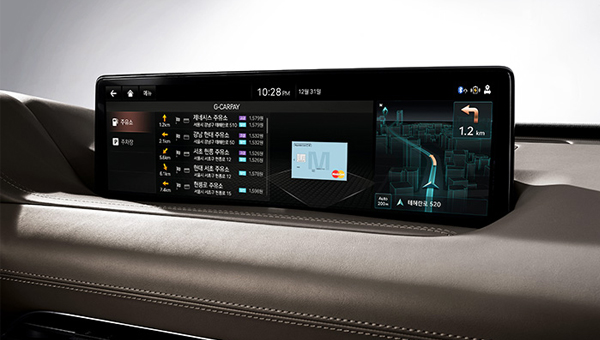 According to industry sources on Monday, Hyundai Motor’s Bluelink, Kia’s UVO and Genesis Connected Services will soon be managed under one connected service brand to allow Hyundai, Kia and Genesis drivers to connect their vehicles’ infotainment system with a unified smartphone app for the remote control of vehicle doors, windows and heating, ventilation and air conditioning system.

It is not decided when the Korean auto giant would launch its single connected car service brand, but it would not be long as it has set a goal to secure 10 million membership users to its connected car services this year. It now offers the service in Korea, the U.S., China, Canada, India, Europe and Russia and plans to expand the service coverage to all countries across the world. Under the scheme, Hyundai Motor Group has forged a partnership with U.S. chipmaker Nvidia to deploy its advanced in-vehicle infotainment system in all its new vehicles.

Over-the-air update is now available for almost every finished vehicle of Hyundai, Kia and Genesis. Software updates for car repair and maintenance only are required to be done manually at each brand’s service center, except for Genesis’ first all-electric GV60 SUV with the over-the-air update option under the first regulatory sandbox case.

Finished carmakers have been actively seeking an integrated connected car service for their brands. Porsche recently launched an integrated app My Porsche in 25 languages for 47 countries to allow drivers to remotely control and check the fueling/charging conditions, driving range, current location and others of all Porsche models released after 2016.

Japanese automaker Toyota Motor plans to launch its own operating system dubbed Arene by 2025 to handle advanced operations such as autonomous driving, battery management, entertainment and navigation. Its affiliates such as Subaru, as well as its suppliers and independent startup developers will be able to use Arene in the future, and Toyota now is mulling a licensing model to make its automotive software platform Arene available to other car makers for revenue generation.