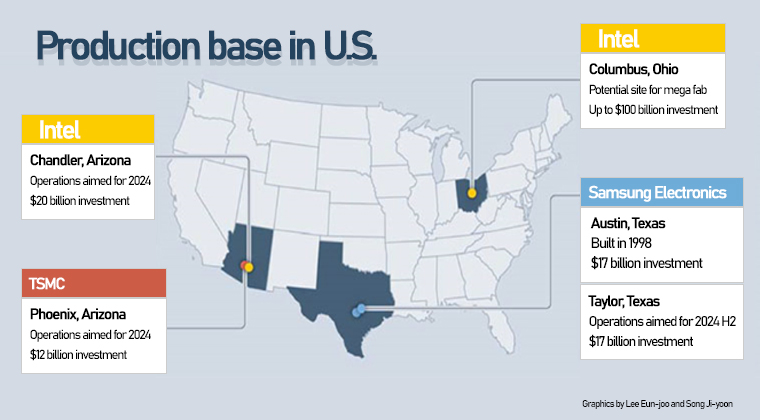 이미지 확대
The United States has become a battlefield for global chip leaders Samsung Electronics Co., Intel Corp., and Taiwan Semiconductor Manufacturing Company (TSMC) as they capitalize on various incentives under the CHIPs for America Act for leadership in the digital transitional period.

Intel has become latest to announce a mega chip project in the country - $20 billion chip plant near Columbus in Ohio.

The so-called mega fab will have six to 8 chip lines, research facilities, and training center. Intel envisions to create a mega fab each in the U.S. and Europe. Total investment in the project would exceed $100 billion.

Intel who has sold flash memory operation to SK hynix of Korea has also been shaken in its longstanding predominance in computer processing units (CPUs). It lost major customer Apple which chose to develop own processor due to Intel’s stalled migration to 10 nanometer chipmaking process. AMD has already moved onto 7-nm CPU. Small nanometer in processor enhances chip efficiency and reduces power consumption.

Taiwan’s NVIDIA is fast rising with its own graphics processing unit (GPU).

Intel has turned to foundry business that would churn out automotive chips as well as source of new growth on full backing from the U.S. government under the $52 billion CHIPS for America program to boost chip competitiveness. 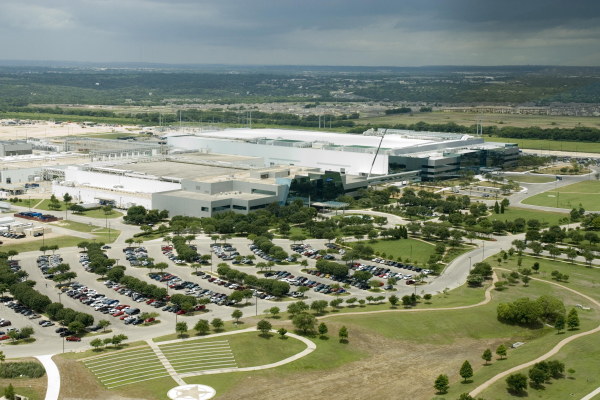 U.S. courting to fend off China’s ascension in chipmaking would intensify battle among chip leaders – Samsung in memory, TSMC in consigned chipmaking, and Intel in CPU – once their new foundries under construction are ready for operation in 2024.

Samsung Electronics’ new $17 billion factory in Taylor, Texas, will launch construction early this year for operations in the second half of 2024. TSMC and Intel are also building plants in Arizona for operations two years later.

Globally, TSMC has announced to invest a record $44 billion this year, with spending mostly going into building new production lines in Taiwan and the U.S.

Samsung Electronics is also expected to build its No. 4 line in Pyeongtaek, Gyeonggi Province this year and Intel plans to add mega fab in Europe.

By Lee Seung-hoon and Lee Eun-joo