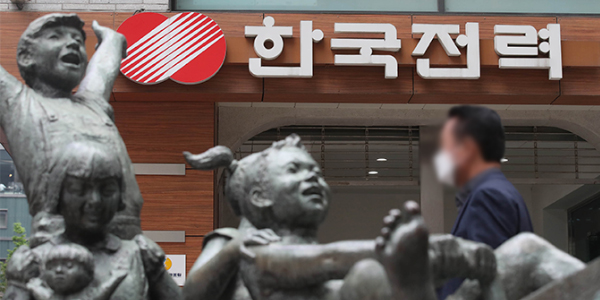 Korea Electric Power Corp. (KEPCO) has incurred an operating loss of near 8 trillion won ($6.2 billion) in the first quarter alone, overwhelming last year’s full loss of 5.9 trillion won as it had been contained from raising electricity bills despite a jump in coal and gas prices that make up the bulk of power sourcing, sending the primary state utility to mull emergency property and other asset sale.

KEPCO on Friday disclosed an operating loss of 7.79 trillion won on a consolidated basis for the first quarter ended March, sharply reversing from a profit of 565.6 billion won in the same period a year ago.

Such red has been unprecedented for the Korean utility company and overwhelms last year’s full operating loss of 5.86 trillion won.

Fuel cost soared 93 percent and the cost of power purchase from public and private generators 111.7 percent due to spike in imported fuel prices.

Profit from electricity sale, in contrast, rose a mere 7.6 percent to 15.4 trillion won.

The cost of power purchase jumped as LNG and coal make up more than 85 percent of the operating cost.

Yet, KEPCO was unable to raise power bills on government pressure to contain inflationary buildup.

KEPCO launched an emergency taskforce team with other public utility suppliers to attempt to offload properties and other assets amid chain bankruptcies of energy companies around the world.

KEPCO has already issued 13 trillion won in new debt due to lack of operating funds, but the money would be far short to keep up with fast rises in power source costs.

The system marginal price (SMP), referring to the price that KEPCO pays to electricity producers, gained 4.8 percent on month to 202.11 won per killowatt-hour (kWh) in April, according to the Korea Power Exchange, a quasi-government agency responsible for operating the electricity market and the electric power system. It is the first time for the SMP to top 200 won per kWh since the agency opened in 2001.